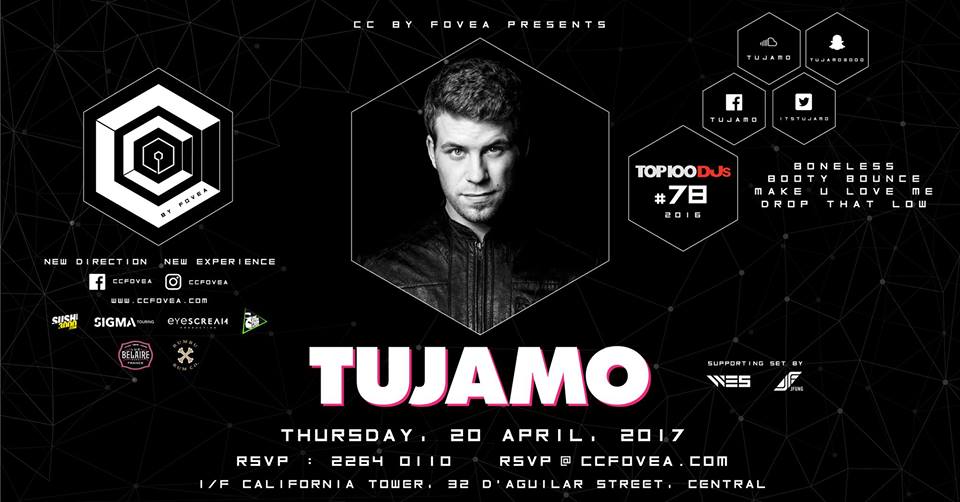 TUJAMO
TUJAMO is an electro house music producer, who along with Plastik Funk and Sneakbo released the single "Dr. Who!", which peaked at number 21 on the UK Singles Chart. He also had a hit with Steve Aoki and Chris Lake, "Boneless", which charted at #49 on the German Singles Chart and #42 on the Austrian Singles Chart.

TUJAMO was born Matthias Richter in 1988 in Detmold, Germany. He began DJing at age 17 and in 2006 participated in and won a talent competition hosted by Club Index in Schüttorf, where he became a resident DJ. He began using the Tujamo moniker that same year and released his debut single, "Mombasa", in 2011.His first hit, "Who", was originally released in 2011 in collaboration with Plastik Funk, also from Germany. It became a large hit at the Winter Music Conference, a Miami house club. In 2014, his single "Boneless", released in collaboration with Steve Aoki and Chris Lake, charted at #49 on the German Singles Chart and #42 on the Dutch Singles Chart. The following year, he reworked "Who" as "Dr. Who!" with vocals from British rapper Sneakbo and it charted at #21 on the UK Singles Chart, receiving support from Avicii, Tiesto, Fedde Le Grand and Steve Aoki. He has also remixed songs by Bob Sinclar, Peter Gelderblom and Wynter Gordon and has played all over Germany and globally, including South America, Turkey, Brazil and Russia.Some of his other singles include "How We Roll", "Do It All Night", "Back 2 You" and a cover version of Laserkraft 3D's "Nein Mann".

WE5
Wesley Chiu better known as WE5 fell in love with House music in 2006. He started to take the professional path in 2011 when his friends bought him his first DJ gear. He was a resident Dj for Urban Agent Sydney and he started to play the biggest clubs like Volar, Bamboo and OPM Marquee Sydney in 2012. Djing professionally also led him to produce his own original records. His first single ‘Motions’ was released under Spanish Record Label Ritmo Loco Records on Beatport and iTunes in Dec 2012. His production was inspired by Avicii, Porter Robinson, W&W and Zedd. In 2013, he started Djing in Hong Kong. He had his first DJ show ‘Motions’ at Kee Club Hong Kong and since then he has been doing gigs for Nova and Kee Club for numerous occasions. He has devoted most of his spare time doing remixes for Avicii, Calvin Harris, Zedd, Krewella and many more. WE5’s Gold Skies remix by Martin Garrix, Sander Van Doorn and DVBBS was supported by Top 100 DJ Sidney Samson on Rock the Houze Radio and his remix of Porter Robinson’s Sea of Voices has also gained the likes from Paris Blohm and many more international DJs. In 2016, WE5 participated in the Cymatics Remix Contest and has selected to be the contest winner with over 1,000 partcipants. WE5’s new signature future bass sound has also got the likes, support and follow from The Chainsmokers with 1.3 million plays across Soundcloud! WE5’s recent remix with Mickey Valen and Noé has already reached #8 in the Soundcloud New & Hot Charts with over 100,000 plays in a month!