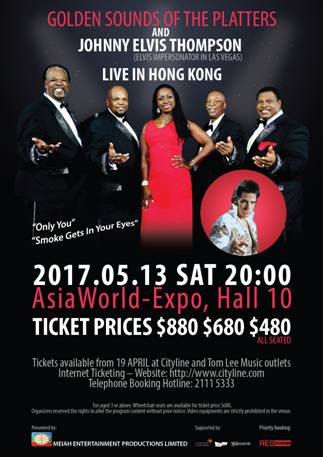 Led by Eddie Stovall, the only living member who has performed with last of the original Platters members Tony Williams, Golden Sounds of the Platters is hailed as the foremost tribute band of the iconic American vocal group. The group does not only engage audiences with their smooth harmonies but also charm concert fans with their unique brand of showmanship. The nostalgic sounds will be joined by Thompson to relive the magical music era of the ‘50s and the ‘60s in one unforgettable show.

Johnny Thompson, winner of Elvis National Award in USA is considered as one of the best impersonators of late legend Elvis Presley. MTV USA and Las Vegas have named Thompson the number 1 tribute artist of the king of rock and roll having performed in Las Vegas for 15 years before going on tour all over the world.

This time in Hong Kong, they are continuing their romantic tradition with their spot-on renditions of classics such as “Only You,” “Smoke Gets In Your Eyes”, “The Great Pretender”, “Love Me Tender”, “Can’t Help Falling In Love”, “Twilight Time”, “Remember When”, “The Magic Touch” and “My Prayer”.

Presented by Mei Ah Entertainment Productions Limited, Golden Sounds of the Platters and Johnny Elvis Thompson Live in Hong Kong is definitely an amazing show that you should not miss.

Golden Sounds of the Platters