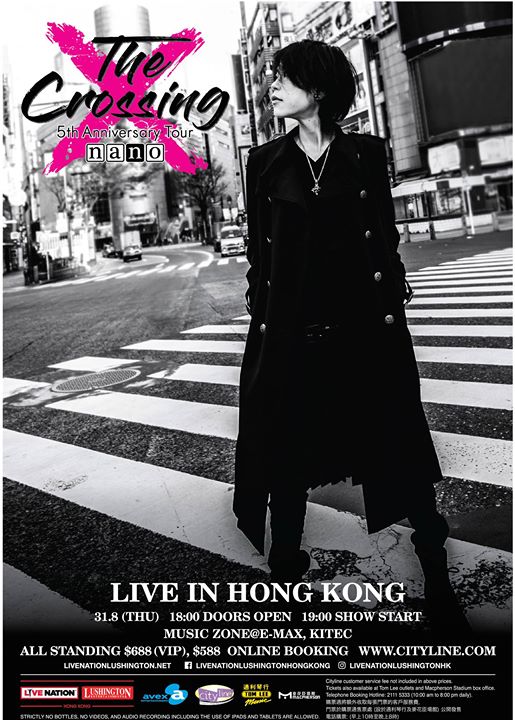 Nano is making her Hong Kong debut at Music zone@E-max, KITEC this August!

nano’s new album, titled “The Crossing” will consist of 12 songs in total including 8 brand new singles. It will be available on May 31 in three different versions.

nano was Born in New York, America. A bilingual singer with a powerful and unique voice. After posting English covers of Japanese music, she immediately received attention on video sites such as Youtube, and fans started to increase around the world. nano's debut album “nanoir” was released in March 2012. It peaked at 10th place in Oricon Daily Chart and caused an unusual chart action as a rookie.

Following the success of the album, first live show “Remember your color” was held in March 2013, and 2,500 tickets were sold out on the first day. In May of the same year, nano was invited by Japanese culture convention “DoKomi” that took place in Dusseldorf, Germany. Concert was packed with 1,500 audience. Last album “Rock on” was released in January 2015, and peaked at 6th on the Oricon weekly charts.

Since then, nano has been holding live tours in Japan every year. She is also doing solo concerts overseas, first one was held in Taiwan in April 2015. Fans continue to grow worldwide, as this amazing voice knows no borders.

Do not miss the opportunity to witness nano’s amazing performance on stage in Hong Kong for the very first time!