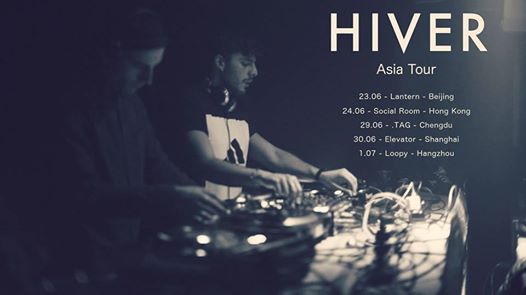 Italy's Hiver are touring Asia and their second stop is at Social Room on Saturday June 24, presented by Jackrabbit and Hypnotic!

Giuseppe and Sergio were born in the same town and eventually both moved to Milan where they started working on music together.
Labels started to take an interest in their productions and they released their first EP “A Day” on Vidab Records in 2012.
Following the well acclamated release on Curle “Blue Aconite” EP, featuring a Tobias. remix, they started to get booked all over Europe.

2014 was strong year for Hiver, with sets at Panorama Bar / Berghain, Dimensions Festival and Rio de Janeiro, and they also released some ep's on Vidab.

In 2015 another release on Curle followed an appearance on Kann, Appian Sounds and Bokhari record.

2016 saw them djing at Off Sonar and ADE festival, and the boys made their London debut at Oval space. They released their third EP on Curle Recordings and appeared on Luke Hess's label Deeplabs and Taped Artifact.

Apart from music production, they have held a residency at the prestigious Dude Club in Milan since 2012.

Richard Brophy from Juno Plus wrote: “the middle ground between US and European electronic music is where the work of Hiver exists.”