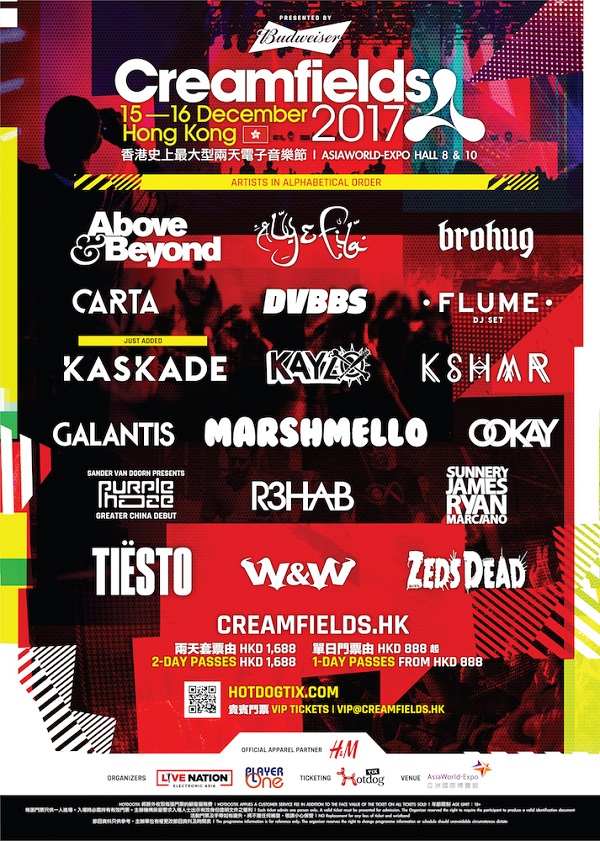 This year, Creamfields is going to bring this biggest indoor party to the Asia for it’s first-time ever - Hong Kong! By collaborating with a top-notch production crew, Creamfields will kick-off an unprecedented experience in Hong Kong for a 2-day event with a unbeatable DJ line-up in order to deliver a powerful, energetic and unique performance.

Creamfields is the world's leading dance music festival series, as well as the biggest one in the UK featuring DJ performances and live acts. Creamfields aims to provide the clubbing world with a bespoke large scale event and has gone on to become the most popular and world-renowned electronic music festival. Since its inception, Creamfields has scooped many awards along the way, including Best Dance Event several years running in the UK Festival Awards and winning the prestigious Music Week Award for Festival Of The Year.

The first Creamfields was born in 1998 and held in the Winchester. For the past series, Creamfields has been held in many countries all around the world, including the Europe, South America, North America, Middle East and Oceania. Over the past years, Creamfields attracts more than 3 millions of partygoers worldwide with record breaking numbers selling out months in advance. The success of Creamfields has attracted global attention which has led to the festival being staged on every continent.

It's famous for many things not least its heritage but its consistent delivery of a world class line-up and unbeatable atmosphere. The Creamfields line-up mixes together genre breaking pioneers from across the DJ and live music spectrum. World-class artist including Armin Van Buuren, Martin Garrix, Hardwell, Tiësto, The Chainsmokers, Above & Beyond, Marshmello, Skrillex, Calvin Harris and many more.

The line-up so far in alphabetical order: