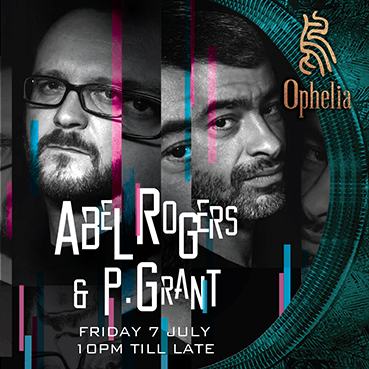 Abel Rogers is a virtuose of the turntables, first stepping up to the decks in 1998. Fascinated by African American soul music, Abel advocates music which is particular in it's genre and could be considered underground. It is a mix of Deep House and Soulful with hints of Disco and Funk.

Abel developed his technique and style. His discernment, his love of music and his resoluteness, gains him recognition from musical Greats as he mixes in Mexico, Miami, Paris, New York and across the world alongside renowned DJs such as Quentin Harris, Mr.V, Yass, Copyright, DJ Deep, Franck Roger, Claude Monnet, Jay Sebag...

P.Grant was heavily influenced by music from many directions. Due to his childhood influences from South of France as well as parents of both Afro-American & Corsican decent, his style varies from Electro, House, Nu Jazz, Soul, Lounge and Eclectic.

Dance to their music at Ophelia on July 7th, from 10pm till late!