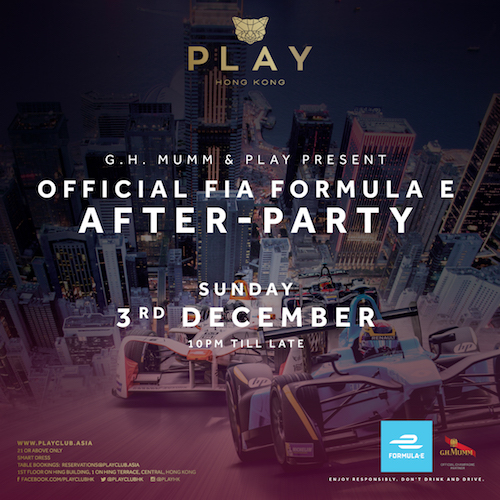 Next Sunday on 3rd December from 10 pm, PLAY is thrilled to welcome back the Formula E crew for a party starting from 10 pm. At the after party, a night of celebration featuring a daring performance by international guest acts – Coco Robert, appearances by FIA Formula E drivers and plenty of bottles of Mumm Grand Cordon are to be expected.Two years in succession, Formula E is once again hosting the world biggest motorsport event in Central HarbourFront Hong Kong. Two full days of world-class racing are to be held on 2 and 3 December (Saturday and Sunday). Being the only Formula E event in Asia, the HKT Hong Kong ePrix is opening the FIA Formula E Championship’s forth season with Asia’s first-ever dual-race competition. Spectacular races will take place in one of the most challenging tracks.

Experience the exclusive #DAREWINCELEBRATE photo opportunity tunnel installation, custom designed by G.H.Mumm for PLAY and start your December with us for a fun-filled victorious celebration!

Named the "Hottest DJ at Fashion Week" by the New York Post, Coco was always drawn to all things music and media. A Greenwich, CT native, Coco pursued that passion while at New York University, where she received her bachelor's degree in Music and Entertainment Business.

Since first stepping up to the decks at age seventeen, Coco has had the privilege of spinning in cities from Beverly Hills to Buenos Aires. Her recent clientele includes TRU Hollywood, Bally Swiss, Victoria's Secret, Whitewall Magazine, Libertine London, The New York City Ballet and SPACE Florence. She has been profiled by publications including the New York Post, Metro, and Untitled Magazine.

Today, deejaying is just the beginning for Coco. She has been featured in videos for artists such as Johnny Polygon, SchoolBoy Q and A$AP Rocky, modeled for clients including COACH, Seventeen Magazine and Foot Locker, and worked with brands including Haute Hippie and Nicole Miller.

For table bookings or any other bespoke requirements, please email reservations@playclub.asia

* 21 or above.
* Smart dress. Entry with beachwear, sport wear, shorts and open-toe footwear are entirely at the discretion of the venue. Guests who do not adhere to the dress code may be denied entry.