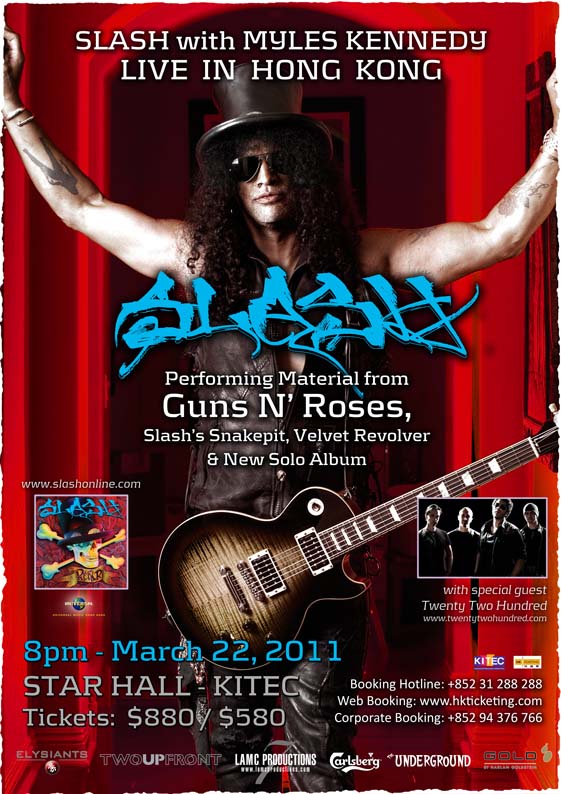 Rugby fans will have an early chance to party to one of the Hong Kong Sevens’ signature songs when iconic rock guitarist SLASH comes to town at the start of tournament week.

The man behind the Guns N’ Roses mega hit “Sweet Child O' Mine” – guaranteed to get Sevens revellers on their feet – will be playing live at Star Hall KITEC(formerly HITEC) on Tuesday 22 March. “We can’t wait to play Hong Kong,” said Slash. “We love the energy and enthusiasm of the fans there.”

“Sweet Child O' Mine” has grown into a Sevens anthem, with fans greeting its unmistakable guitar intro with huge roars of approval. Slash’s live appearance in Hong Kong promises to be a memorable evening of rock ‘n’ roll and a fitting way to get the party started before the Sevens tournament takes place on 25-27 March.

“We know rugby fans love their music, so having Slash in town promises to make Sevens week even more awesome,” said Scott McLean, managing director of concert promoter LAMC Productions (HK) Ltd. “We’re sure the gig will be a big draw for many supporters, whether they live in Hong Kong or are visiting from overseas.”

Having made his name with Guns N’ Roses and earned a reputation as one of the greatest rock guitarists of all time, Slash is now flying solo and released his eponymous album “Slash” last April. The album entered the Billboard 200 charts in the US at No.3 and also debuted at No.1 in Canada, Austria and New Zealand, and has gone platinum in Australia.

Singing with Slash will be renowned vocalist Myles Kennedy from rock group Alter Bridge while other members of his band will be Bobby Schneck (guitar), Todd Kerns (bass) and Brent Fitz (drums). The opening act will be popular Australian band Twenty Two Hundred.

Slash was an integral part of Guns N’ Roses as the hard rockers dominated the 1980s and 90s music scene, selling more than 100 million albums worldwide and ushering in a decade of hard charging rock music. After the band’s break-up, he went on to achieve critical acclaim with his personal project, Slash’s Snakepit, and global success with supergroup Velvet Revolver.

He has received countless accolades and awards including a 2007 star on the Hollywood Walk of Fame alongside his idols Jimmy Page and Jimi Hendrix. A Time Magazine survey placed Slash second only to Hendrix among history’s best ever electric guitarists while “Sweet Child O’ Mine” frequently comes out on top when critics and fans debate the best rock riffs of all time.