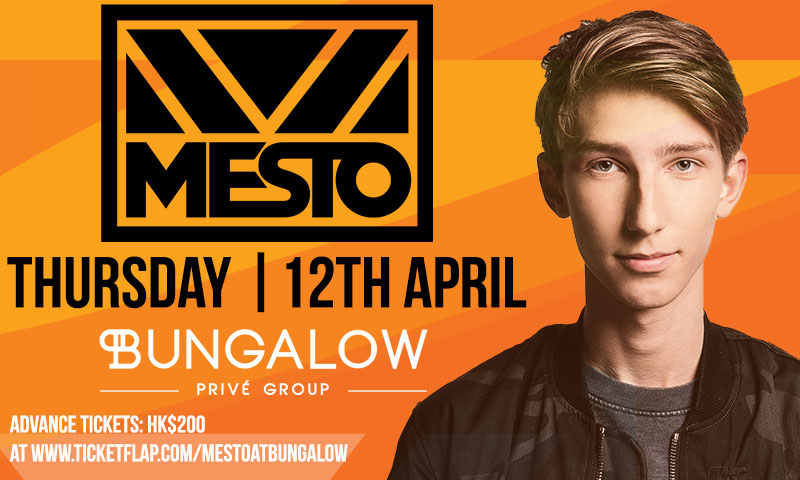 Mesto, one of the fastest-rising Dutch DJs, will be coming to Hong Kong for one night only at Bungalow!

The 18 year old DJ and producer known for his signing with label Spinnin’ Records and releases such as Chances feat. Brielle Von Hugel, Martin Garrix - Bouncybob (feat. Justin Mylo & Mesto), as well as his track with Martin Garrix – WIEE is coming to Hong Kong for his debut show!

Advance tickets are now on sale for those that want to guarantee to be there and down at the front: https://www.ticketflap.com/mestoatbungalow

See you all at Bungalow on Thursday 12th April!

Mesto is one of the fastest-rising DJs on the planet. The Netherlands native possessed enviable mixing and producing skills at the tender age of 18. Now, he has signed exclusively with trend setting label Spinnin’ Records, and ready for global domination. Mesto’s musical roots go even further back. When he was just 11 he learned to play the drums, and quickly realised that he wanted to create entire soundscapes on his own. An interest in Deep House and Future House developed, and Mesto taught himself the ins and outs of electronic producing with a little help from the internet. Never one to be pinned down, Mesto’s mixes and productions blend various styles to create bouncy, futuristic music imbued with the artist’s originality. The press have already coined a phrase for Mesto’s sound, as the Dutch DJ himself explains. “It’s already been said my music is some sort of ‘Future Bounce’. Which is a compliment—my music probably has some sort of trademark sound.” It’s not just Spinnin’ Records who has noticed Mesto’s unique potential. None other than Martin Garrix himself was thrilled to discover the bouncy Mesto sound. Together with Justin Mylo, Garrix and Mesto released ‘Bouncybob’ in 2016, which racked up over 10 million streams on Spotify. We are only at the beginning of Mesto’s exciting career, but he has already made his mark on the international scene, playing Ushuaia Ibiza, South Korea, and Vietnam. Soon, everyone will be talking about Mesto.

He is truly a force to be reckoned with in dance music’s next generation.