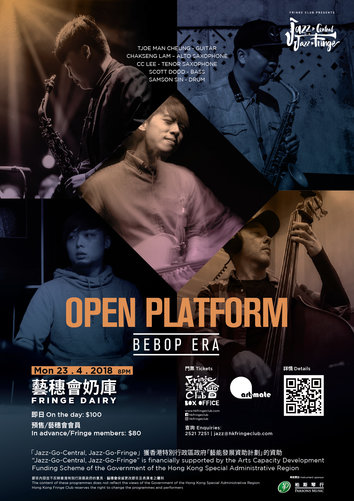 Want to practise your improvisation skills and jam with a jazz band? Here’s your chance! Presented by the Fringe Club as one of the programmes of the “Jazz-Go-Central, Jazz-Go-Fringe” project, Open Platform provides opportunities for young, amateur musicians to jam and improvise with professional artists and bands.

Improvisation is a key aspect of jazz. It is fun to play, improvise, take risks, and jam as a team. As a famous saying goes, “Once is a mistake, twice is jazz.”

The 2nd Open Platform will be hosted by Tjoe Man Cheung, who leads his band NTBM (not-to-be-missed) in an evening of jazz at the Fringe Club. They’ll be opening with a set of original jazz compositions from their latest album, and orange, and selected standards, followed by a jam session focusing on music of the 50s and 60s by such luminaries as Charlie Parker, Dizzy Gillespie, Thelonious Monk, Miles Davis, Lee Morgan, Oscar Peterson, Art Blakey, Dexter Gordon and John Coltrane.

Tjoe Man Cheung
Tjoe is a leading Hong Kong-born-and-bred musician. This alumnus of the Musicians Institute is a favoured sideman in the Pop scene, a talented Jazz and Blues guitarist, and a proficient arranger and composer. Currently the official artist of Melancon, Tjoe is recognised by his creative approach, powerful soloing, unique improvisation and his splash of humour on stage.

From 2015 to 2016, Tjoe lived in London to expand his musical territory. He could often be found plying his trade at top venues such as Ronnie Scott’s, the Southbank Centre and Rich Mix. In addition to his active involvement in various bands and music projects, the young musician also initiated his own project, NTBM, an original jazz collective led by him and comprising emerging musicians from around the world. The group aspires to compose original jazz tunes and perform globally.

In 2017, Tjoe globally released his first album, and orange, with NTBM. It’s available as a 12-inch orange vinyl and a deluxe USB device. The launch was followed by tours to Osaka, Kanazawa, Tokyo, Hong Kong, Guangzhou, Beijing and Kuala Lumpur. Before and orange, Tjoe released an EP titled FLOW in mid-2014, and an EP titled FLOW LONDON in early 2016.

Tjoe is currently based in Hong Kong. In mid-August 2017, NTBM performed at Wow And Flutter, Hong Kong's biggest music festival celebrating local bands. As well as his own project, Tjoe is also the guitarist in local bands Majestic G and tfvsjs, and runs a regular jam session at Peel Fresco every Sunday.

Remarks:
- Admission: 30 minutes before show time.
- No outside drink or food is allowed inside the venue.
- Limited seats, first-come-first-served.
- *Fringe Club membership card MUST be presented at the door.

“Jazz-Go-Central, Jazz-Go-Fringe” is financially supported by the Arts Capacity Development Funding Scheme of the Government of the Hong Kong Special Administrative Region