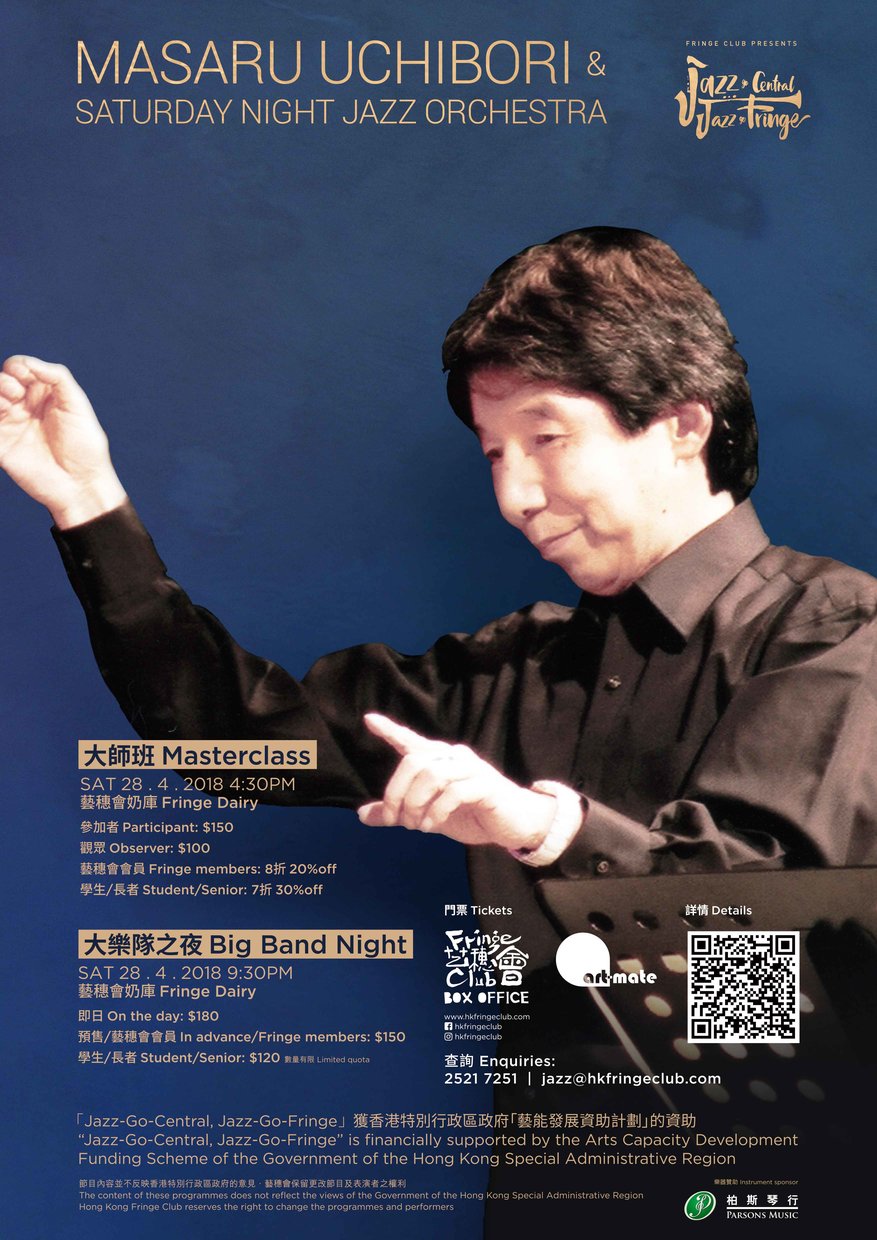 Jazz Masterclass is one of the programmes of the “Jazz-Go-Central, Jazz-Go-Fringe” project, presented by the Fringe Club and the Saturday Night Jazz Orchestra. Japanese big band arranger Masaru Uchibori will conduct a masterclass for the band-members. It’s open to the public and musicians are invited. Come and sharpen your musical skills!

In the concert "Big Band Night - All That Swing" on April 28, the big band will perform pieces arranged by Masaru Uchibori.
For details:
http://www.hkfringeclub.com/en/whatson/1220

Masaru Uchibori
Masaru Uchibori was born in Tokyo. At high school, he joined the school brass band, and has played trombone ever since. He was a member of the big band and the brass band at university, learning jazz theory from Mr. Sadao Watanabe and playing trombone in Watanabe’s rehearsal orchestra.

In 1974, Uchibori received a scholarship to Berklee College of Music in Boston, and after graduating he returned to Japan, where he works as a freelance arranger of various music genres.

He has been the judge of many music contests, including the Yamano Big Band Contest and the Asakusa Jazz Contest, and is active in events for amateur bands. He has released two CDs: WAYNE (2004) and A Dedication To Jazz Giants (2010).

Remarks:
- If you are interested in participating in the master class, please select "$150 - Participant" ticket price category. Please bring your own instrument to the Masterclass. Limited quota, first-come-first served.
- If you would like to attend the master class as an audience, please select "$100 - Observer" ticket price category. Seats are limited, first-come-first served.
- Admission: 30 minutes before show time.
- No outside drink or food is allowed inside the venue.
- Limited seats, first-come-first-served.

“Jazz-Go-Central, Jazz-Go-Fringe” is financially supported by the Arts Capacity Development Funding Scheme of the Government of the Hong Kong Special Administrative Region