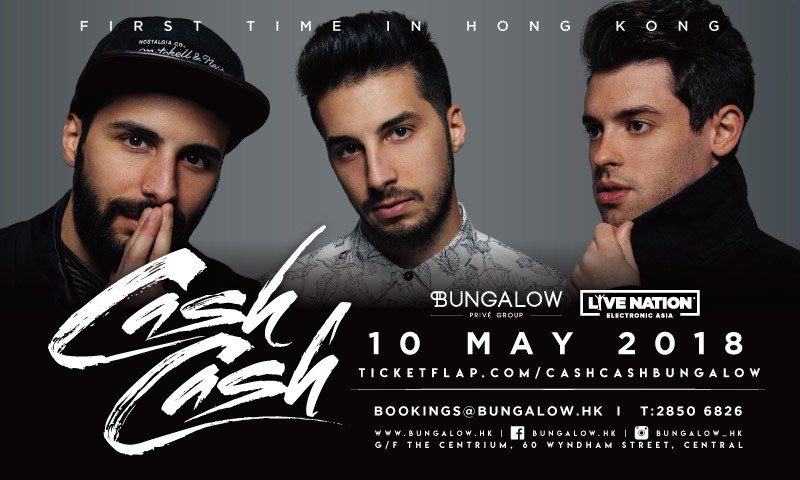 Known for their infectious dance music mixing electro, pop, and dance, Cash Cash is a DJ trio hailing from New York City and currently signed to Big Beat/Atlantic Records. The group consists of brothers Jean Paul Makhlouf and Alex Makhlouf, as well as life-long friend Samuel Frisch. Together, they have released four full-length albums and an array of EPs and singles which continues to blur the lines between genres.

In the midst of creating their extensive catalogue of charting originals, they have also served as remixers for acts like Krewella, Capital Cities, Kelly Clarkson, and Bruno Mars. Their latest full-length album “Blood, Sweat & 3 Years,” is Cash Cash’s way of bringing music listeners from all genres together under one rattling roof. Merging different styles from hip hop, rock and pop with electronic dance music, the trio has managed to blend tear-jerking lyrics, expressive synths, thunderous basslines with their signature infectious melodies.

As of 2017, their catalogue of music made them one of the top 200 most streamed artists on Spotify worldwide with their RIAA-certified platinum electro-pop anthem “Take Me Home feat. Bebe Rexha” streamed more than 100 million times. Their follow up single “Surrender” with American singer Julia Michaels on vocals also broke US Top 40 radio and reached #1 on US dance radio. The group’s success extended beyond their home turf after achieving platinum, gold, and silver records in countries such as Canada, the United Kingdom, and Australia. With a growing list of collaborations with A-list artists such as John Rzeznik of the Goo Goo Dolls, Nelly, Christina Perri, Busta Rhymes, B.o.B, Trinidad James, the trio is destined to become a household name in the scene.

Performing live in Hong Kong for the first time, catch their electrifying set at Bungalow on May 10th - advance tickets are now on sale now!