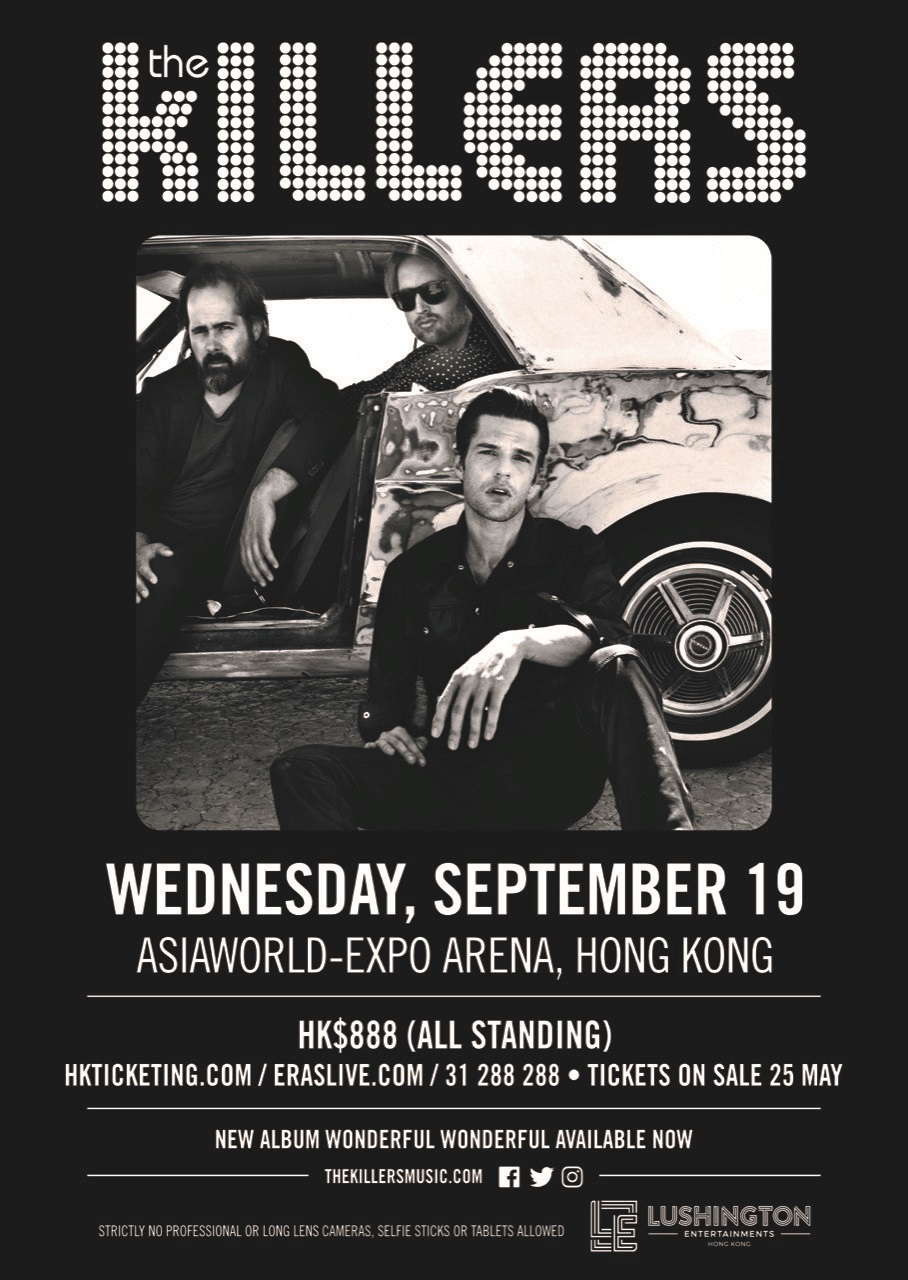 Lushington Entertainments is thrilled to announce THE KILLERS will return to perform live in Hong Kong on 19 September 2018 (Wednesday) at the AsiaWorld-Expo, Arena. The American rock band will perform tracks from their latest album Wonderul Wonderful and hit songs. They last performed in Hong Kong in 2013.

The Killers’ debut album, Hot Fuss, was released in 2004 to worldwide acclaim.  The album contained the now-classic singles “Mr. Brightside” and “Somebody Told Me,” in addition to the anthemic “All These Things That I’ve Done,” which has since been referenced by the likes of U2 and Coldplay. The band has gone on to receive countless accolades for their artistic achievement, including multiple Brit Awards, Grammy nominations, American Music Award nominations, MTV Video Music Awards, NME Awards and more.

The band toured for two years straight behind Hot Fuss, playing more than four-hundred shows to ever-increasing crowds around the world, eventually returning to Las Vegas to begin to work on its successor with legendary producers Alan Moulder and Flood.  The result, a love letter of sorts to their hometown entitled Sam’s Town, was released in 2006 and spent forty-two weeks on the Billboard Top 200. A b-sides and rarities collection, Sawdust, was released in 2007, followed by their third studio album, Day & Age, which was released to widespread critical praise in 2008, anchored by the massive single, “Human”.

The Killers released Battle Born in September 2012, expanding their world tour into countries they’ve never visited before, and went on, in 2013, to achieve a feat only dreamed of by most, performing a sold out show at the world-renowned Wembley Stadium, one of the most monumental and significant shows of their career.

The band, who have sold over twenty-five million albums worldwide, and headlined all of the world’s top festivals (Coachella, Lollapalooza, Glastonbury), released their newest studio album, Wonderful Wonderful, in September 2017, where it landed at No. 1 on the Billboard Top 200 chart the week of its release, as well as topping the charts in the U.K., Mexico, and Australia. The album gave the band a record-breaking fifth consecutive number one in the U.K., and Brandon Flowers’ seventh U.K. number one overall, since his two solo albums both also topped the charts.

The Killers’ recent tour dates in Europe, North America and Australia have been widely hailed as those of a truly world class band at the very top of their game, and with an enviable back catalogue that includes Mr Brightside, Somebody Told Me, When You Were Young, Human and most recent hits, The Man and Run For Cover, fans truly are in for an incredible show when the group returns to Hong Kong.

Standing tickets are only available to those aged 12 years and above, or height of at least 140cm.