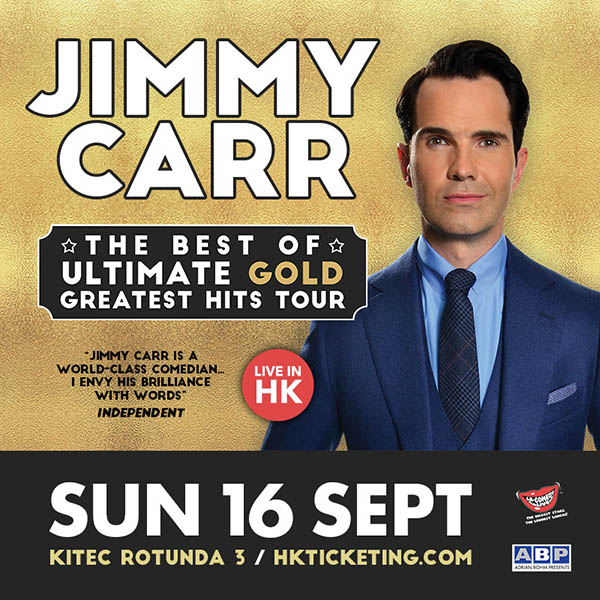 JIMMY CARR - LIVE IN HONG KONG POSTPONED DUE TO TYPHOON

Adrian Bohm Presents, LA Comedy Live & Jimmy Carr have decided to postpone 'Jimmy Carr: The Best Of, Ultimate, Gold, Greatest Hits World Tour Hong Kong' as scheduled to take place on Sep 16, 2018 at 7pm at Rotunda 3, Kowloonbay International Trade & Exhibition Centre, Kowloon, Hong Kong due to Typhoon Mangkhut.  Details on rescheduled date will be announced shortly.  All existing tickets will be valid for new date and if you are not able to attend the new date, refunds will be made available. Ticket holders are encouraged to retain their tickets pending the announcement of new dates.

We apologise for any inconvenience caused. Stay safe, everyone.

LA Comedy Live and Adrian Bohm Presents are proud to announce the return of Britain’s best-loved comedian and one of the biggest selling live acts in UK comedy, Jimmy Carr to Hong Kong on September 16, 2018 at Kitec Rotunda 3!

Jimmy is gathering a selection of his very best jokes along with brand new material for the ultimate comedy show.
“A comedy hero for our time”’ - Guardian
A man who has devoted his life to crafting perfect jokes and has left a trail of laughter in his wake, Jimmy Carr’s new tour will distil everything we love to laugh at and be shocked by, into one incredible, unparalleled night of entertainment.
Jimmy Carr has been on the stand-up scene for a decade and a half. In that time, he’s performed 9 sell-out tours, playing nearly 2,000 shows to over 2 million people across 4 continents. He’s won the British Comedy Award for ‘Best Live Stand-Up Tour’ and been nominated for the Perrier Award.
His television credits include 18 series as host of panel show 8 Out Of 10 Cats (as well as 9 series of spin-off 8 Out Of 10 Cats Does Countdown), over 10 years as host of Channel 4’s Big Fat Quiz Of The Year and three appearances on The Royal Variety Performance. He has also regularly appeared on shows such as QI and A League Of Their Own, was one of the stars of Channel 4’s 10 O’Clock Live and has been a guest on chat shows such as The Jonathan Ross Show, Graham Norton and Alan Carr: Chatty Man.

Jimmy has eight live DVD releases to his name: Live, Stand Up, Comedian, In Concert, Telling Jokes, Making People Laugh, Being Funny and Laughing & Joking. He has sold over 1.2 million copies to date.

“Jimmy Carr is a world-class comedian…I envy his brilliance with words.” - Independent
Now all that experience is being put to good use - you can see all the greatest material from his extraordinary career in one show - this is the very best of Jimmy Carr.
Tickets on sale now through the official ticketing agent HK Ticketing at http://hkticketing.com/, and via the HK Ticketing Hotline (852) 31 288 288 and at all HK Ticketing Authorised Agents.