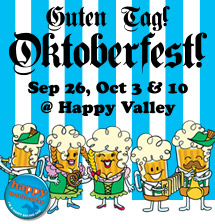 Celebrations all around – here we go. Keeping up with at-least-two-century-long tradition born out of Munich to celebrate a royal marriage, Oktoberfest maintains its edge of modernity with annual worldwide celebrations made up of a host of entertainment that began with horseracing accompanied by feasting of delicious German foods & beer, parades, and the fun of dressing up.

Spanning three Wednesdays in a row starting on Sep 26, the first of which opens with an extravagant ceremony hosted by The Hong Kong Jockey Club’s CEO, Mr. Engelbrecht-Bresges accompanied by Consul General of Germany, Mr. Dieter Lamlé, and continuing to Oct 3 before finally closing on the Oct 10, here’s the party plan: More details can be found here.