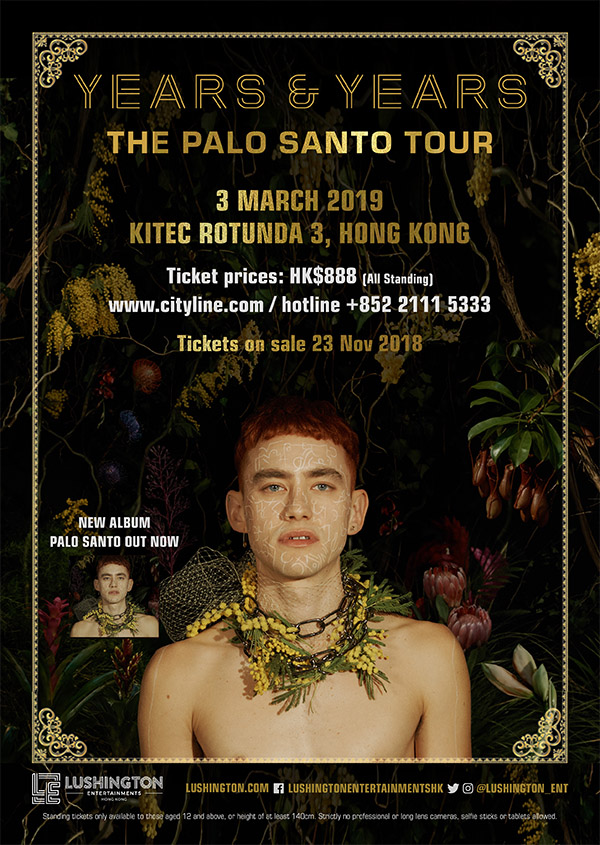 (Hong Kong, 15 Feb, 2019) We regretfully announce that due to unforeseen circumstances, the following dates on  Years & Years The Palo Santo Asia Tour are cancelled:

The artist is hoping to reschedule these as soon as possible. Shows in Taiwan, Japan and South Korea will go ahead as planned.

In the meantime, full refunds for tickets purchased for the Hong Kong show will be available via Cityline.

Full refund will be automatically deposited to the same Credit Card account used for ticket purchased for the event.  No refund in either cash or cheque will be made for tickets purchased by Credit Card.

Please bring along the physical ticket(s) to the Cityline Head Office during business hours for the period between 25th February – 15th March, 2019 (except Saturday, Sunday and Public Holiday) to process a refund.

A refund in cash cheque will be made at the Cityline Head Office upon submission of a completed Refund Application Form with match ticket(s). The ticket holder must sign to acknowledge receipt of the refund.  Any Cash Refund requests received after 15th March 2019 will not be processed.

Lushington Entertainments is proud to announce Years & Years will perform live in Hong Kong on 3 March 2019 (Sunday) at KITEC Rotunda 3, in support of their second album ‘Palo Santo’.

Years & Years are Olly Alexander, Mikey Goldsworthy and Emre Türkman. Formed in 2010 in London, the trio’s keyboard- and electronics-based sound first gained exposure when the single “Traps” was released in 2013. In 2015, the band released their debut full-length album Communion, featuring hit singles “King” and “Shine”. The well-received album debuted at number one in the U.K. With Communion, Years & Years made a palpable new tribal impact on pop.

In July 2018, Years & Years released their hugely-anticipated second album Palo Santo. The album is stuffed full of meaningful hits including “Sanctify” and “If You’re Over Me”, a transitional leap from the lay-lines of the homespun pop majesty of Communion toward something of the crystalline magic that ran once through the Jackson family fingertips. Throughout, Years & Years have crafted their own special landmarks that feel intuitively connected to great British pop classicism while standing bolt upright on a world stage next to Drake, The Weeknd and Rihanna.

Palo Santo is a whole new universe created from the imagination of frontman Olly. ‘Where can I be my freest self, not tied to a gender or sexuality. I’ll just create my own world where those things don’t exist, where anybody can be any gender and sexuality that they like.’ In this thrilling parallel universe, light years from here and now, a utopia has been sketched out. It will be revealed across all the media surrounding Palo Santo, in videos, narratives online and off, finally climaxing in every sense of the word onstage in the all new Years & Years show.
‘It came from loads of different ideas of what Years & Years is about and what I am about,’ Olly says. ‘I felt like creating that space and playing around in there would be a good thing to do. It has all my favourite things combined: sci-fi, spiritualism, performance and identity.’