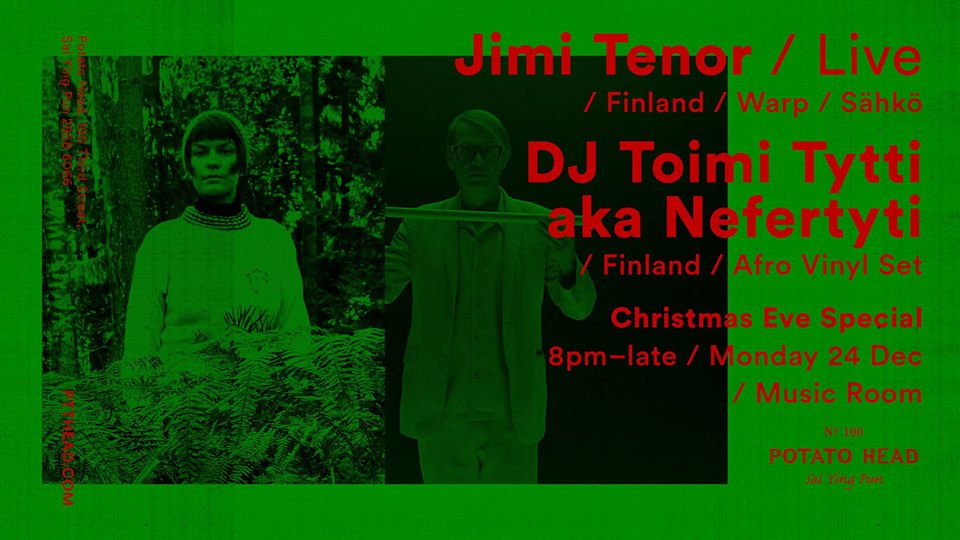 A Christmas Eve Special with Jazz composer, multi-instrumentalist, and electronic artist Jimi Tenor playing a live, improvised, abstract set. Jimi, known to be a consistently brilliant musician, has recorded with the likes of Toni Allen and released on diverse record labeles, including Warp, Kindered Spirits, Ubiquity, Strut and his own Sähkö imprint.

He will be joined by DJ Toimi Tytti aka Nefertyti, a Finnish Dj, radio personality and producer. She has prepared an exclusive rare afro funk inspired vinyl set for us.

Jimi Tenor has never settled for the traditional role of a pop artist. He is known as a productive musician whose work lies beyond current trends, and also as a performer who combines the finest elements of afro-american music, spontaneous silliness and shameless glamour in an original way.

The music industry has found it difficult to operate with Jimi Tenor at times. The hard rock driven Finland of the 80s considered him weird and too marginal. In Britain in the 90s he was seen as a trendy techno jazz artist, but Tenor soon confused the pioneering electro label Warp by delivering an imaginary - and expensive - soundtrack album with a symphony orchestra, instead of making minimalistic hits.

Today Jimi Tenor is an established European artist who operates outside the mainstream. His audience consists of clubbers and alternative rock enthusiasts looking for new perspective, but also of jazz and funk rebels. Those who understand that even unconventional pop music can move your body and heart.