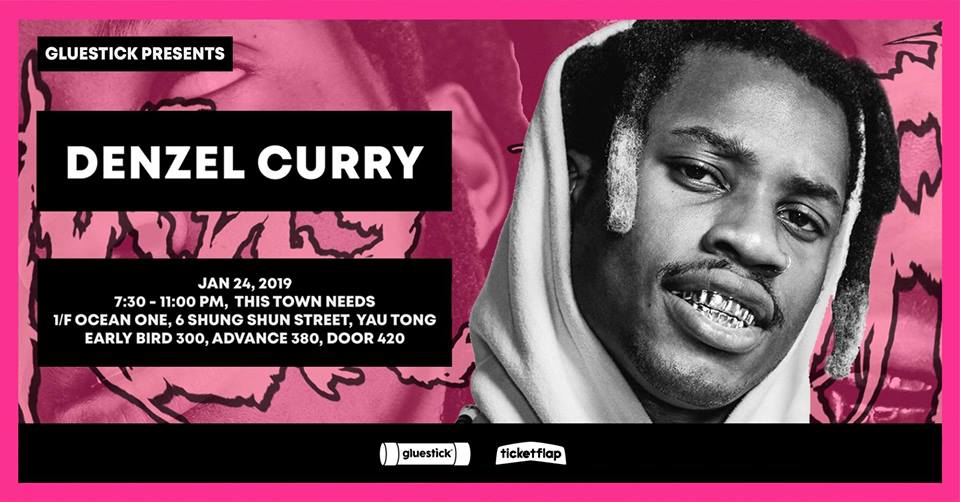 We are excited to announce that we are hosting Denzel Curry's first-ever Hong Kong show this January. It will be the first time in years HK has had a headlining show for an international rapper. If you like rap, hip-hop and trap music, this is a night you do not want to miss! Tickets available on Monday via Ticketflap

Denzel Curry is a rapper from Carol City, Florida. Curry is known for being one of the first members of Raider Klan alongside the likes of Spaceghostpurp, Yung Simmie and others. Raider Klan is known for contributing to ASAP Rocky and the ASAP Mob's aesthetic and sound early on. After leaving the Klan in 2013, Curry released his debut studio album 'Nostalgic 64,' which contains features from Robb Bank$, Lil Ugly Mane and production from Ronny J. He then released Imperial in 2016, which features Joey Badass, Rick Ross and production from Ronny J and Steve Lacy. Curry was featured on the cover as one of XXL Magazine's 2016 Freshman Class, and cyphered alongside Lil Uzi Vert, 21 Savage, Lil Yachty and Kodak Black - the most viewed XXL freestyle cypher to date. His latest album 'TA13OO' dropped in July 2018 and features guest appearances from Billie Eilish, GoldLink, J.Cole signee J.I.D, Tekashi 6ix9ine-affiliate ZillaKami and more. 'TA13OO' received critical acclaim upon release across many major publications. He has also collaborated with Xxxtentacion, Ski Mask The Slump God, Wiz Khalifa, Juicy J, BADBADNOTGOOD, Flatbush Zombies Official, Ekali, SUICIDEBOYS, AJ Tracey, JME, Jpegmafia and many others. Rich Brian regards Denzel Curry as one of his favorite rappers ever and primary influences.