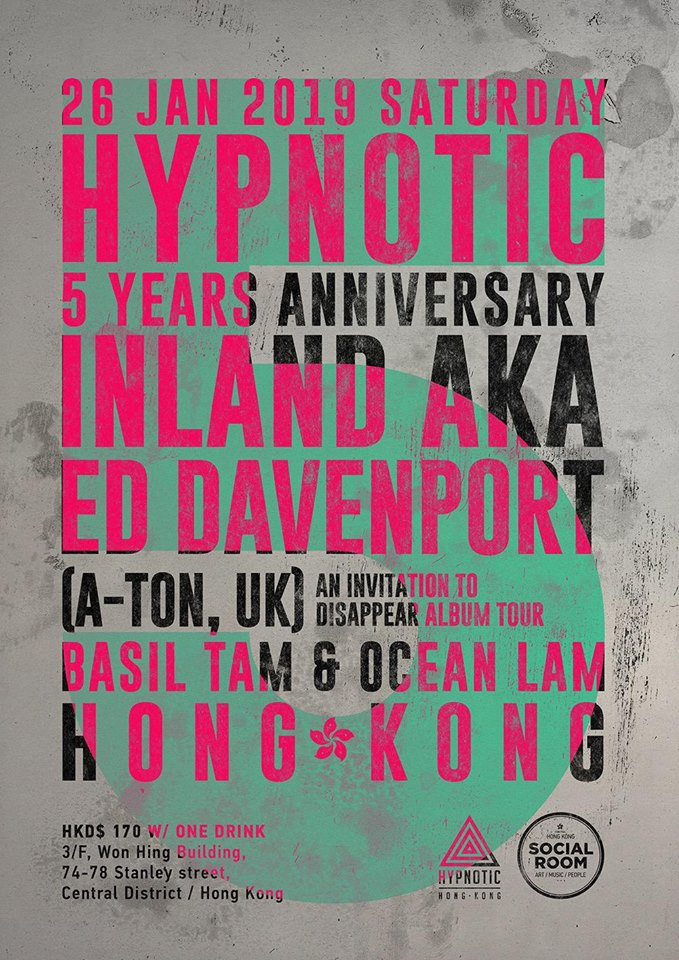 We are very excited to present Inland's aka Ed Davenport (A-TON, Berlin/ UK) "An Invitation To Disappear" Album Tour to celebrate Hypnotic's 5 Year Anniversary and our very own Ocean`s birthday at Social Room on 26th January 2019!

Thank you so much for your support over the last 5 years, we always remember the smiles with music, love and fun ♥

Artist Bio:
Inland (real name Ed Davenport) is a British producer, DJ and founder of Counterchange Recordings based in Berlin. Known for his detailed and explorative techno releases on Counterchange, Infrastructure, Naïf and more, Inland's debut LP on Ostgut Ton sub-label A- TON will be released in September 2018.

A collaboration with conceptual artist Julian Charrière, 'An Invitation To Disappear' translates Davenport's soundtrack for Charrière's gallery-based video installation into eight tracks of rhythmically intricate electronics and spectral techno. Tracking through a palm oil plantation toward a totemic soundsystem on full blast, the LP and Film were debut live at Berghain in September.

A passion for timeless, cerebral and hypnotic strains of electronic music led to the release of Davenport's first wave of productions in 2006, characterised by a deeper strain of minimal house earlier on (records on German labels Gumption and Liebe*Detail) to a moody, broken- beat techno hybrid that peaked with key releases such as 'More Red Lights' on classic UK label NRK in 2011 and his 'Counterchange' LP the following year. His modernist, minimal- music indepted releases as Ed Davenport on Mano Le Tough, Baikal and The Drifter's Maeve label ('Silver Walks' EP, 2015, 'Mendocino', 2018) champion a unique skill for storytelling.

As Inland today his busy output stands for purist and inherently progressive rhythmic work; grounded in the romantic traditions of early Techno yet driven by a constant search for new ground, textures and studio-techniques. Working closely alongside US artist Function between 2014 and 2017, the pair released the comeback record for Function's classic Infrastucture label, with their critically acclaimed 'Odeon / Rhyl' EP and went on to compile the heavyweight 'Facticity' compilation, also teaming up with the timeless 'Colwyn Bay' in 2016. Simultaneously, since 2013, Davenport's own Counterchange label has notched up over 10 releases - the idiosyncratic 'Solstice' EP (2013) a blueprint for the Inland sound. Primarily a home for his own productions, the label also put out music from his contemporaries including Boddika, BNJMN, Cassegrain & Tin Man, Distant Echoes and Pharaoh & Yogg.

In recent years Davenport has gravitated more and more towards the contemporary art world, finding inspiration in the fruitful cross-pollination happening in Berlin's art and music scenes. Earlier sound design collaborations with Charrière have been exhibited in institutions in Lausanne ('Somewhere', 2014), Vienna ('Iroojrilik', 2017) and Mainz ('An Invitation To Disappear', 2018) while Davenport also made a soundtrack for duo Wermke / Leinkauf's '4. Halbzeit' video installation - part of the prestigious Berliner Herbstsalon at the Maxim Gorki Theatre, Berlin 2017.

Hope to see you on the dance floor!
Wish everyone all the best to the New Year!