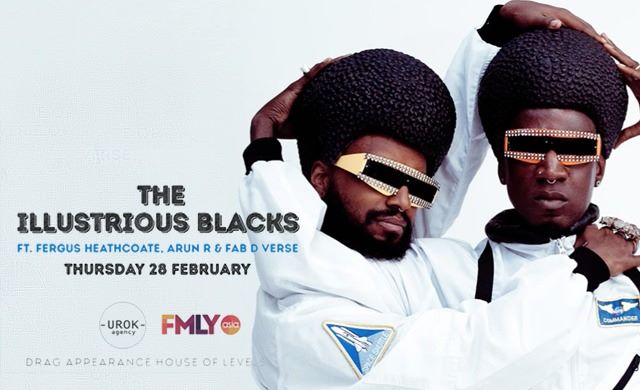 Ophelia present The Illustrious Blacks Exclusive Hong Kong show! Once upon a time in a galaxy not far away, there lived two kings. Each was the ruler of his own deliciously glorious planet. The first king, Manchildblack, was well known throughout the cosmos for his ethereal vocals, celestial sonics and earthy musical messages. The other king, Monstah Manchild Black, was a star in the solar system for his gravity defying performances, gender bending fashions and spacey disposition. One magical night, an inexplicable ultra-magnetic pull forced the two planets to collide. A technicoloured explosion occurred, turning night into day, with a feast of aural and visual delights. It was then that the universe was changed forever. Manchildblack and Monstah Black united and became The Illustrious Blacks.With inspiration from artists like Prince, David Bowie, Grace Jones, Boy George and George Clinton, The Illustrious Blacks have arrived with a mission to fuse futuristic funk, hypnotic house and cosmic pop into pulsating positivity for the planet. The real life married couple are not only co -pilots on their artistic voyage, but are united in their fantastical journey through life.The acclaimed duo found even more praise for their epic live shows and DJ sets, which fuse music, dance, theatre & fashion as the ingredients to expand minds, shake booty’s and save the world one beat at a time. Their infectious DJ set on Okayplayer’s Facebook live went viral and has put them on the global radar of emerging artists. The Illustrious Blacks have been receiving praise from major media outlets. Their celebratory music video “Black Like Jesus” was premiered in Billboard Magazine and their latest single “Revolutionary Love” debuted in Paper Magazine. The couple was also followed around their Brooklyn neighborhood for an article in the New York Times.Together, as The Illustrious Blacks, they have combined their powers and metamorphosed into supernovas, blazing through the Milky Way like a comet, with their own unique brand of cosmic freak nobility.Supporting DJ's alongside The Illustrious Blacks will be DJ DJ Fergus Heathcote, FAB D VERSE, DJ Arun R. RSVP for complimentary admission (We welcome Walk-Ins, however Pelago RSVP will automatically have a spot on our guest list and have priority due to capacity) Table bookings highly advised due to popularity.Table enquiries : +852 2520 1117 | info@ophelia.com.hkDoors open at 18:00 DJ & performers from 9 pm onwards. ---By entering the event, you understand while participating in this event, you may be photographed. You agree to allow your photo, video, or film likeness to be used for any legitimate and/or marketing purpose by the event holders, producers, sponsors, organizers, and assigns.