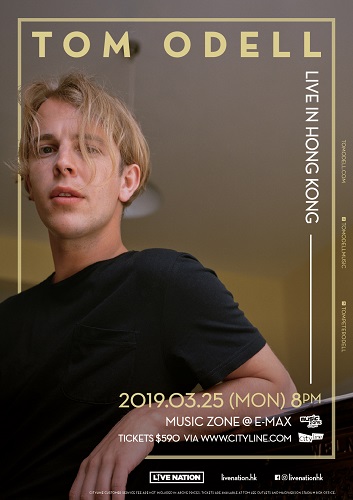 Tom Odell – Ivor Novello-winning songwriting sensation, precocious master of the ivories – is at the very top of his game. It’s not as if, with multiple awards and 1.8 million sales under his belt, the Chichester-born prodigy has anything to prove. His debut album, 2013’s Long Way Down, topped the charts in the UK, on the back of breakthrough smash, ‘Another Love’, and by late ’14 he was in the Top Ten again with a cover of The Beatles’ ‘Real Love’, recorded for John Lewis’ Christmas ad campaign. Alongside standout tracks such as ‘Grow Old With Me’, ‘Heal’ and ‘Can’t Pretend’, public affection for Tom and his quaveringly emotional way with a tune was only deepened.

Odell’s second long-player, Wrong Crowd, pretty much replicated its predecessor’s success, hitting No. 2 in ’16, with another biggie aboard in ‘Magnetised’. Still only 27, he quickly strikes back with his third, Jubilee Road – a career-defining record, which saw the multi-talented young artist take full control of his music, not only writing, singing, and vamping up his vibrant piano style on all ten songs, but also self-producing them.