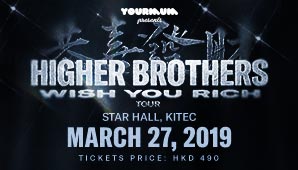 YourMum is delighted to welcome Chinese rap crew Higher Brothers back to Hong Kong for their largest ever headline show at Star Hall on March 27, and following their show stealing performance headlining the FWD stage at Clockenflap 2017.

MasiWei, Melo and Psy.P met as 18 year olds. They became involved in the CDC (Chengdu SHuochang Huiguan) collective, before meeting DZ Know online and forming Higher Brothers and in the process shining the light on a nascent yet exploding Trap scene happening in Chengdu.

One of the leading lights in the 88rising stable, their 2016 mixtape proceeded their debut album ‘Black Cab’ in 2017. Their ‘Made In China’ single brought them to global audiences with a viral reaction video, showing the likes of Migos, Lil Yachty and Playboy Carti watching and commenting positively on the video racking up a combined 12 million views to date, along with the song.

The ‘Journey To The West’ EP followed in 2018 before latest LP ‘Five Stars’ dropped in Feb this year. Dubbed the “biggest Chinese rap album ever” guest features from the likes of: Ski Mask, The Slump God, Denzel Curry, JID, Soulja Boy, ScHoolboy Q, Rich Brian and many others stand as a testament to Higher Brother’s growing influence in the West, along with hop hop’s uniting bond across cultures.

Now, Higher Brothers are back on their ‘Wish You Rich’ tour, making a one-night-only stop in Hong Kong at Star Hall on March 27. Come catch the group at the height of their powers and witness the undeniable charisma and flow that makes them so special.