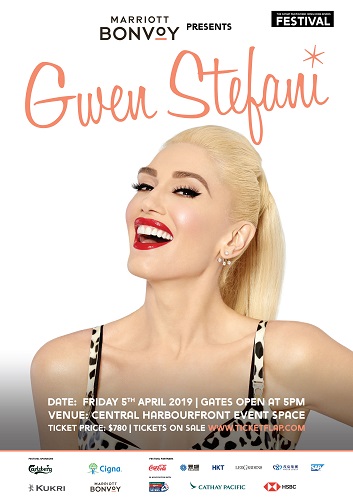 The concert will headline the activities as part of the 2019 Cathay Pacific/HSBC Hong Kong Sevens Festival and will be the first time Stefani has performed in Hong Kong for more than a decade.

Trendsetter Stefani has achieved worldwide success as a performer, songwriter, and recording artist who has sold more than 30 million albums worldwide with No Doubt and as a multi-platinum solo artist.

The 2019 edition will incorporate the city’s Central Harbourfront event space, with the venue hosting Stefani on April 5 before transforming into ‘Sevens Central’ for Saturday, April 6 and Sunday, April 7, a fanzone featuring live music, entertainers, the rugby action on big screen and free entry.

The popular Fanwalk will also return to Lee Gardens in Causeway Bay across April 5-7, featuring a ninja course, children’s activities, street performers and other activations.