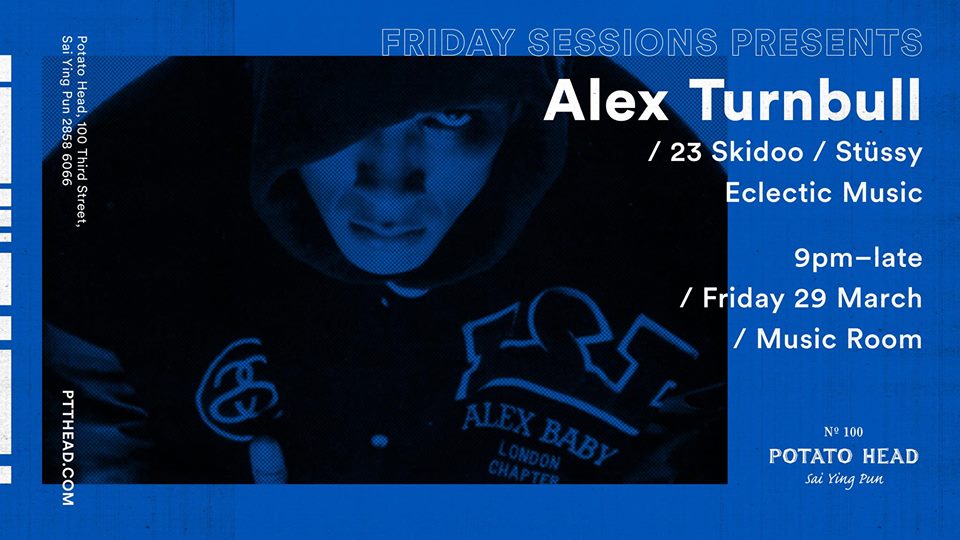 Friday Session welcomes back one of the UK's music pioneers, Alex 'Baby' Turnbull from London. His journey behind the wheels of steel began back in 1983 and since then,  Alex has become one of London’s most recognised and well-respected DJs, whilst representing the first wave of street culture through as International Tribe member of the Original Stussy crew.

prior to commercialism in music . If you had to describe 23 Skidoo's sound, it has interests in martial arts, Burundi and Kodo drumming, Fela Kuti, The Last Poets, William S. Burroughs, and emerging confluence of industrial, post-punk and funk around that time, heard in artists such as A Certain Ratio, Throbbing Gristle, Cabaret Voltaire, The Pop Group and This Heat.  During travels in Indonesia around the time, Turnbull was exposed to the Gamelan, which they incorporated in their LP Urban Gamelan (1984). 'The band recruited Aswad's horn section for the "Coup" 12", which featured samples from Francis Ford Coppola's Apocalypse Now'.

Towards the late 80's Alex 'Baby ' Turnbull went on to found one of the UK’s first hip-hop labels Ronin Records, along with his brother Johnny. They released material by Deckwrecka, Roots Manuva, and Rodney P amongst others.

Experimentalism and the spirit of counter-culture were always the motivation for Alex behind the decks and in approaching his artistic direction. The son of influential sculptors William Turnbull and Kim Lim, Alex grew up at the nexus of artistic endeavour, expression and creativity.

‘Our home was the kind of environment where it seemed completely normal to have big section of metal girder painted bright red in the back garden,’ says Alex.

Join us in the Music Room for an evening of free-spirited music.