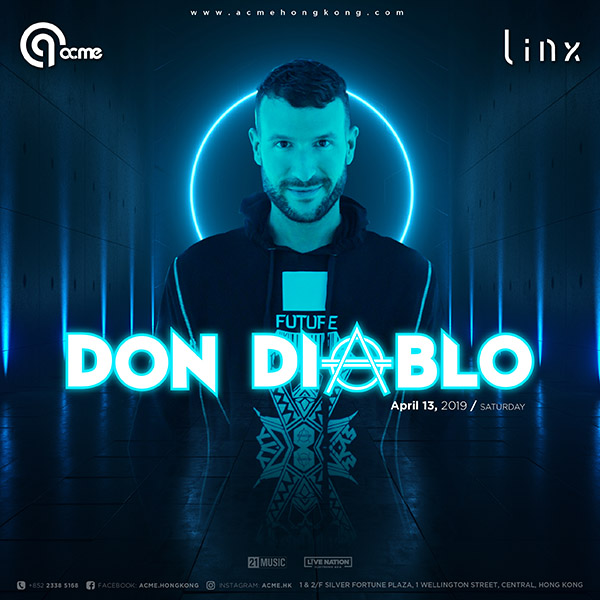 Dutch DJ and producer Don Diablo is among the biggest acts in stadium-sequestering dance music. Ranked No.7 on DJ Mag Top 100 and claimed the Future House crown in 2018 with sold-out tours and megastar collabs under his belt, he makes it all look easy.

His success wasn’t handed to him, though. It’s the result of two decades of graft, which began in 1998 with ferocious hard house and gabber tracks for labels such as Re-fuse. Since, Don has tried his hand at a variety of less strident dance genres, from electro-house to EDM, gradually distilling his sound into the sparkly hybrid it is now.

Don Diablo’s career was sent skyward by the Hexagon visual concept, designed to add a new dimension to his DJ gigs, which he first unveiled in 2014. Hexagon has since become a brand encompassing a record label, clothing line and radio show. Successful, pop-tilted releases for majors Warner and Universal and big dance label Spinnin’, followed in Hexagon’s trail, while a collaboration with Tiësto (‘Chemicals’), and a zeitgeist-chasing sound that nods as much to house as it does the commercial end of trap, have contributed to his notoriety.

2018 was also a big year for vocal tracks, with Don working with a broad spectrum of vocalists, from soul and country stars to rap demigods. In the studio he collaborated with a wide variety of artists, ranging from Emeli Sande to Gucci Mane and from Calum Scott to Ansel Elgort.

Not content with solely touring and making music, Don has also maintained a heavy involvement in developing acts through HEXAGON and pushing his forward-thinking label to new heights in 2018. He's been working on a brand-new artist project signed to the label — a mysterious producer by the name of Big Pineapple. According to Don, fans should "expect big things" from the new production outfit in 2019.

Terms and Conditions
- There is a 7% online booking fee charged per ticket sold.
- On purchasing the ticket you agree for your personal details to be provided to the venue for ticketing purposes on the door on the night of the event.
- On purchasing the ticket you agree to subscribe to the venues newsletter.
- This event is only permitted to those over the age of 18.