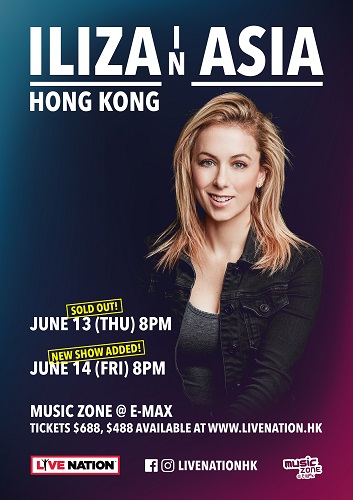 Due to overwhelming demand, Live Nation is thrilled announce an additional show for Iliza in Asia Hong Kong Live, hosted by one of the America’s hottest comedians Iliza Shlesinger on 14 June (Friday) at Music Zone @ E-Max in addition to her sold-out debut on 13 June.

Iliza has taken the comedy world by storm with 4 Netflix specials, on top of numerous television and film appearances. Her comedy which highlights social issues with a comical twist is sure to charm Hong Kong audiences as it already has audiences across the globe.

In 2018, Iliza premiered Elder Millennial, her fourth Netflix stand-up special for the streaming service, in which she dove into the undeniable truths about life at 35, and the insanity of the road she has taken to get there. Later in the same year she appeared alongside Mark Wahlberg in the Paramount Pictures movie “Instant Family”.

Originally from Dallas, Iliza is based in Los Angeles and is the only female and youngest comedian to hold the title of NBC's Last Comic Standing.