We Are You - Stefano Ritteri (Viaggio UK), IXA 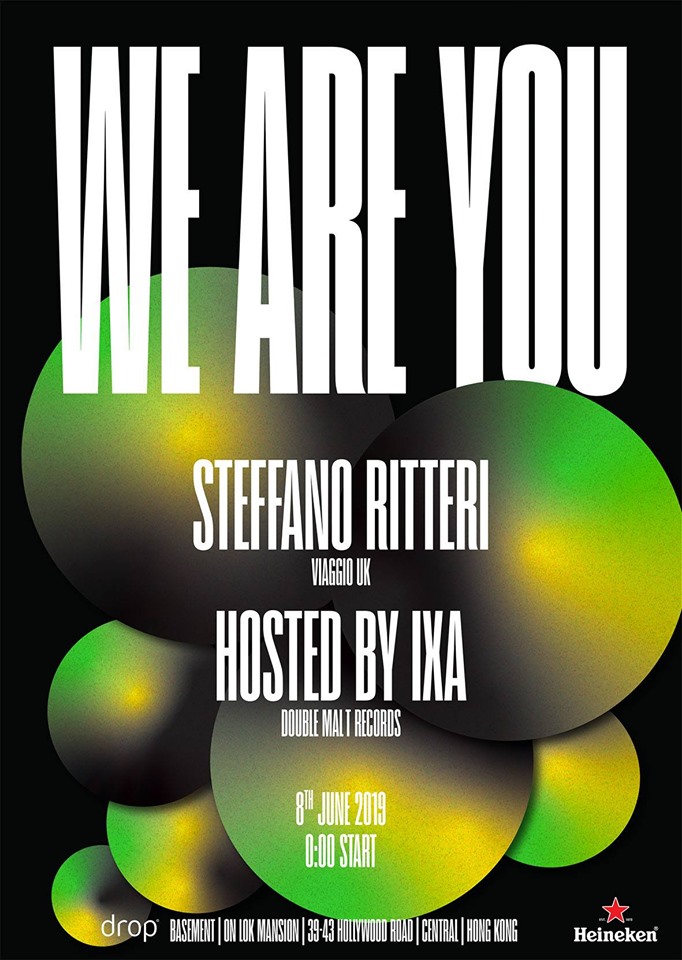 Every month we will be shining a light on Hong Kong’s most progressive and forward thinking DJs and international guests. Giving them the space and time to express themselves to a group of likeminded friends from across Hong Kong and around the world.

Listen to We Are You
Mixcloud: http://tinyurl.com/yyultn7z

With DRAFUS tearing the place to pieces at our last party we had to step things up a gear and we haven't let you down. Joining our prodigious host IXA is

Stefano Ritteri doesn’t care about genres and boundaries.He makes good music . His italian passion and obsession for obscure samples and homemade synthesisers can be easily identified and in the past 10 years Stefano has released on a handful of diverse and eclectic labels such as Get Physical, Dirtybird, Exploited, Pets Recordings and Rockets and Ponies.

As a DJ his style is also very recognisable. He mixes African and Asian traditional songs with house and techno and often swings in between tempos and styles. Stefano tours extensively and scored a residency at Fabric a few years back ( with the Solo moniker ) and his energy takes him to many after parties and bizarre situations. A trained pianist and drummer, in recent years Stefano has started working as a composer and engineer for TV and Advertising. His biggest claim to date is working on the soundtrack for the British Premier League which has been streamed millions of times on several platforms ( even though Stefano’s team remains Roma ) Always eager ( and that’s an understatement ) to speak about music instruments and production, Stefano lectures regularly in universities and music schools around the world. Many of his talks have been featured in magazines and can be found online and enjoyed and revered by fellow nerds. Stefano’s music is championed and supported by Pete Tong, Annie Mac and B-traits, and besides appearing on several BBC Radio 1 programs , he started his own monthly show on Rinse France. With many new songs already released this year and more the near future, Stefano is preparing to throw curveballs and surprise his friends and fans. And that he cares about, very very much.

UK born, Hong Kong based producer IXA is pushing his unique electronic music around the world. His sound delves deep into a musical past rich in soulful, electronic influences with haunting vocal samples, deep, emotional synths and unrelenting beats featuring heavily in both IXA productions and DJ sets. With performances alongside luminaries such as Pete Tong, Skream, Booka Shade, Sasha, Cassius and festival appearances at ULTRA, Sonar, ALTN8 and Clockenflap the IXA musical adventure is just beginning.

Check out his latest music on Double Malt Records


Join us next Saturday and arrive early to avoid disappointment.