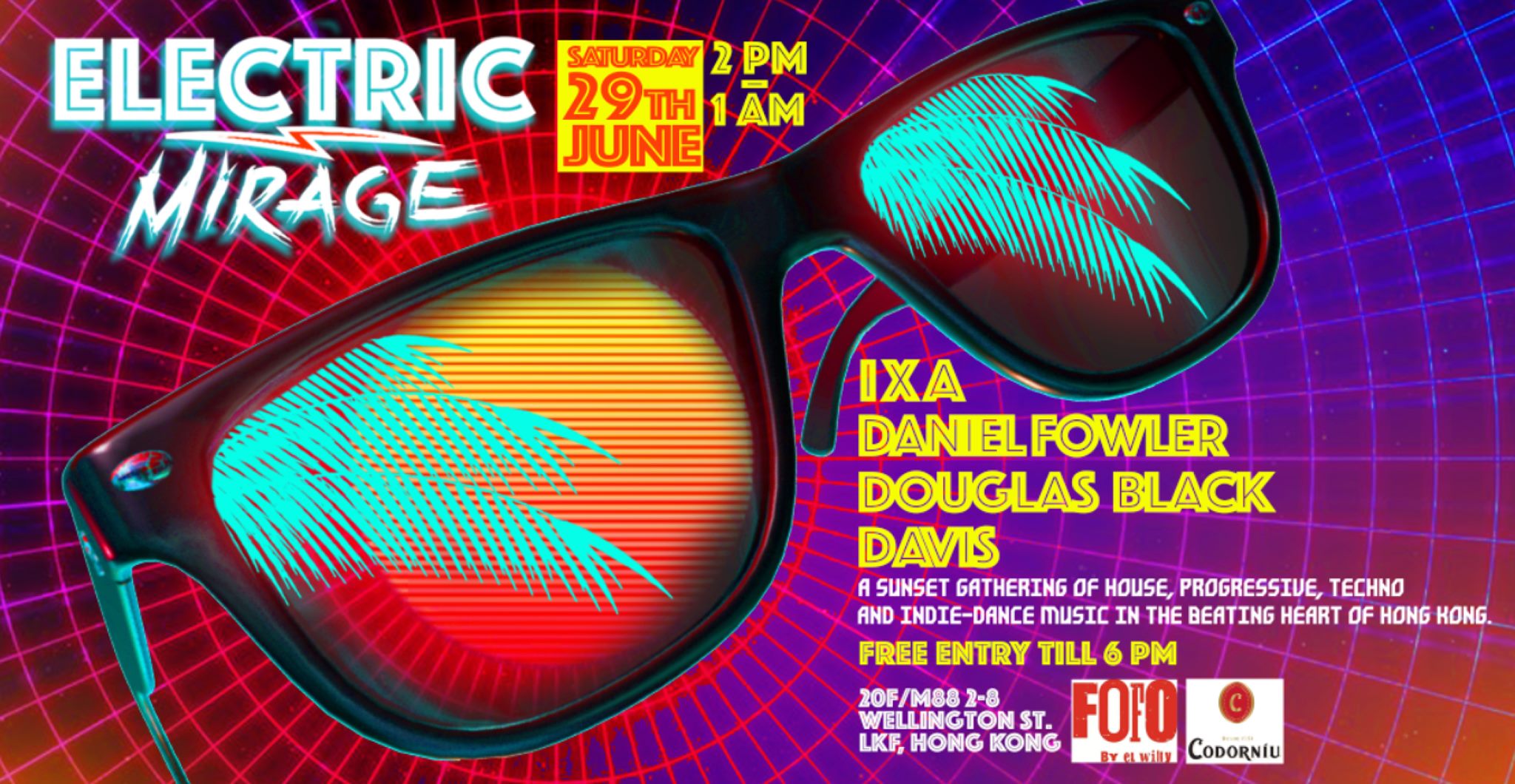 After the huge success of our last event in May, Electric Mirage is back — and you can expect even more great music, chill vibes, and unforgettable memories for our next rooftop party!

This June 29, join us once again at the beautiful rooftop of Fo Fo by El Willy for a full day-and-night musical bash from 2 PM until 1 AM. Come chill in the afternoon sun with a cold beverage, stick around for the gorgeous sunset, and then get wild into the night!

A limited number of discounted tickets will be available via EventBrite. These tickets all will include 1 free beverage and re-entry.

Finally, we have worked out a very special brunch deal for a limited number of customers who book ahead of time with the restaurant:

Fo Fo by El Willy will be providing a LIMITED SEATING surf & turf brunch WITH free flow cava & sangria 12- 3PM AND free tickets to the event for only 450HKD!

There are only 25 seats available for this special Electric Mirage X Fo Fo by El Willy offer, so call them at +852 2900 2009 to reserve before all 25 brunch seatings are gone!

UK-born, Hong-Kong-based producer IXA is pushing his unique electronic music around the world. His sound delves deep into a musical past rich in soulful, electronic influences with haunting vocal samples, deep, emotional synths and unrelenting beats featuring heavily in both IXA productions and DJ sets. With performances alongside luminaries such as Pete Tong, Skream, Booka Shade, Sasha, Cassius and festival appearances at ULTRA, Sonar and Clockenflap, the IXA musical adventure is just beginning. https://doublemaltrecords.com/ixa
https://www.facebook.com/MrIXAMusic/
https://soundcloud.com/ixamusic

From Guitar Hero enthusiast to DJ/producer, UK-born Daniel Fowler grew up in Malaysia and Hong Kong. Influenced by classic pop/rock songs from the '60s - '80s, heavy metal, rap and '90s' video games, Daniel throws genres and predictability out the window to delight audiences with plump basslines, flush chords, and (of course) cheeky glitches. Daniel has released music with Glitch Hop label Digital Whomp as Filth Wizards. A bass odyssey is on the horizon for this young producer.

British-American Douglas Black has spent the majority of his life abroad, and his eclectic life-experiences are reflected in his acute taste in music and a reputation as one of Hong Kong’s most versatile DJs. With musical influences including a wide range of artists such as Way Out West, Shiloh, James Zabiela, Underworld, Sasha, Above & Beyond, Infected Mushroom, BT, and Envotion, Douglas’s sets journey through genre and time while keeping a driving, soulful edge. Douglas is also a co-founder of Electric Mirage, a musical event project designed to bring people together with music to inspire hope and self-expression in the world.
https://www.mixcloud.com/dougblack85
https://www.facebook.com/Dougblack85/

A Los Angeles native DJ and multi-media artist currently based in Hong Kong. Davis has been active in the New York City, Los Angeles, and Amsterdam club and afterhours scenes since 2009. Playing at venues including Odeon (AMS), Paradiso (AMS), The Jane Hotel (NYC), Tenants of The Trees (LA), Skybar (LA), The Ace Hotel (LA), Girl at The White Horse (LA), The Friend (LA), The Buffalo Club (LA), Purple 33(LA), The Rose Room (LA), and serving as a resident of Chateau Marmont.