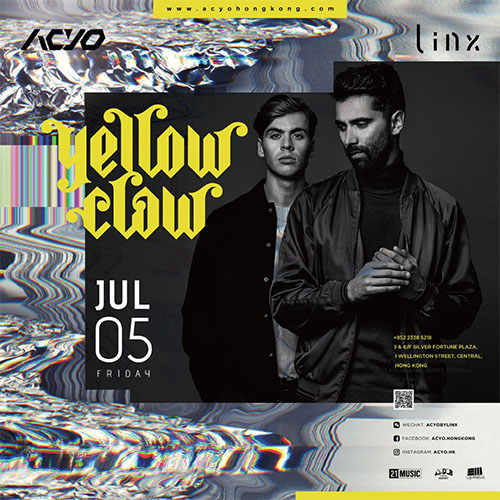 Formed in 2010, Yellow Claw made their name by hosting parties at the Jimmy Woo club in Amsterdam. Their vibrant, campy style spread in 2011 with weekly Yellow Claw parties launched in the cities of Leeuwarden and Breda, while downloads of productions and remixes spread the word online.

In 2013, they released their single "Shotgun" on the Spinnin' label, while two EPs, Amsterdam Trap Music and Amsterdam Twerk Music, launched their relationship with the Mad Decent imprint Jeffree's. Featuring a guest appearance from Waka Flocka Flame, Amsterdam Trap Music, Vol. 2 followed on the label in 2014 and coincided with the launch of the group's streetwear clothing line, Blood for Mercy.

A year later, the brand's name became the title of their next LP as Blood for Mercy -- released by Mad Decent proper -- climbed into the Billboard 200 albums chart. The album featured guest appearances from Pusha T, DJ Mustard, and Flux Pavilion.

In March 2017, Yellow Claw released Los Amsterdam (another full-length release for Mad Decent), which included the singles "Open," "Good Day," and "Love & War." A collaborative single with STORi, "Both of Us" was released later that year.

Throughout the first part of 2018, the duo issued a steady diet of singles including the Valentina-assisted "Villian" and the San Holo collaboration "Summertime" in advance of their third album, New Blood, which arrived in June of that year.

Terms and Conditions
- Advance Tickets: $200 including 2 drinks
- There is a 7% online booking fee charged per ticket sold.
- On purchasing the ticket you agree for your personal details to be provided to the venue for ticketing purposes on the door on the night of the event.
- On purchasing the ticket you agree to subscribe to the venues newsletter.
- This event is only permitted to those over the age of 18.