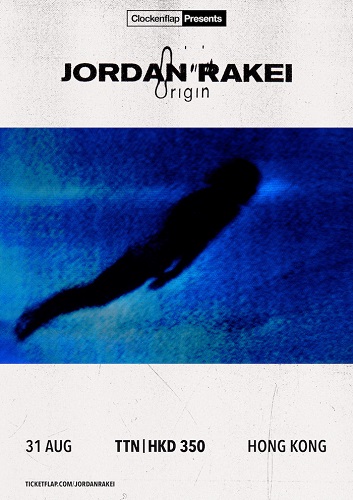 We’re delighted to announce that Jordan Rakei is returning to Hong Kong to headline a show on Aug 31 at TTN as part of his biggest world tour to date.

Born in New Zealand, and having grown up largely in Australia, Jordan moved to London where collaborations with Tom Misch and Disclosure saw him hotly tipped within the new breed of rising talents.  The multi-instrumentalist, vocalist and producer has garnered attention for his timeless soulful, jazz and hip-hop driven sound, with a fistful of highly praised releases under his belt (including 2017’s ‘Wallflower’ and this summer’s ‘Origin’ LP).  He has clocked up over 100m Spotify streams, been voted as the #2 Album of the Year at Gilles Peterson’s Worldwide Awards and graced major festival and events around the world.

Following his standout performance in 2018, local fans can catch Jordan on Aug 31 at TTN.

Tickets: $350 from www.ticketflap.com/jordanrakei available from 10AM on 10 July