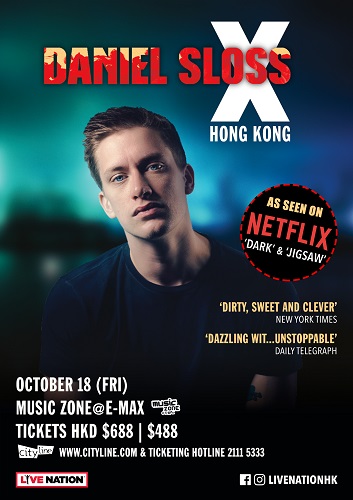 ‘Sloss is at the top of his game... exciting and powerful... Challenging and controversial...
a master craftsman and a truly edgy stand-up star with his finger very much on the pulse... Brilliant!’ – Time Out

Tickets from HKD 488 will go publicly on sale at 10am on August 9, 2019 (Friday). Live Nation Members Pre-sale begins at 10am on August 8, 2019 (Thursday). Please visit www.livenation.hk for membership sign up and pre-sale access.

Creating headlines around the world with his ground-breaking 10th solo show, 29-year-old Scottish comedian Daniel Sloss has appeared on ‘Conan’ 10 times, sold out across 11 consecutive Edinburgh Fringe seasons (the world’s biggest arts festival where he has been one of the biggest comedy ticket sellers for the past decade) and has 5 solo off-Broadway runs to his name (including 42 sold out performances in New York this year alone).

His extraordinary ‘Daniel Sloss: X’ tour already spans more than 250 shows across 36 countries with new dates selling out as fast as they can be added and has received rave reviews from around the world. This is an extraordinary, hilarious and ground-breaking show with strong contemporary adult themes and it is not to be missed.

Contains adult themes of a sexual nature and strong language.

This event is suitable for age 18 or above