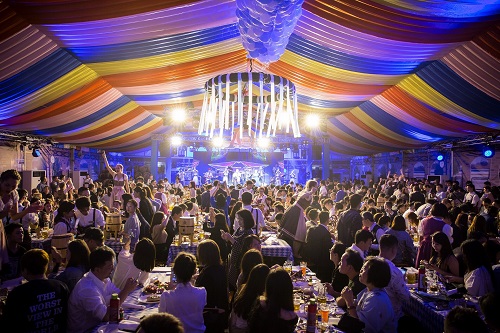 The highly anticipated event Oktoberfest Macau at MGM will soon return to MGM COTAI this October, rocking the town again with the 11-day Bavarian party! As one of the staple annual events in Macau, Oktoberfest this year is proud to celebrate of the 20th Anniversary of the Establishment of the Macau SAR with jubilation by offering an exclusive discount to all Macau local citizens.

This year’s event will continue to partner with the Consulate General of the Federal Republic of Germany in Hong Kong and the German Macau Business Association, and will be supported by the Macao Government Tourism Office.

In the past 10 years, MGM has welcomed nearly 150,000 beer lovers with almost 150,000 liters of beer, over 40,000 kilograms of roasted pork knuckles and chickens. MGM captures the essence of the festivities through the traditional German food and beverage, entertainments and decorations, delivering the most authentic Bavarian party atmosphere to Macau. The beloved Högl Fun Band will once again fly over from Munich for several nights of dynamic live performances to hype up the nights, while Löwenbräu, one of the six genuine German Oktoberfest brews, along with the traditional German gastronomies, Bavarian patterned beer tent and ceiling wreaths with a touch of Macanese decoration, as well as a wide range of carnival game booths, all of these will make Oktoberfest Macau at MGM a guaranteed fun and alive event, just like the Oktoberfest of Munich.

Oktoberfest Macau at MGM 2019 will be held between October 17 and 28, 2019 (excluded October 20) at MGM COTAI’s 1/F Roof Terrace. Admission tickets and table will be available for sale at both MGM properties starting from September 16 (Monday). To celebrate the 20th Anniversary of the Macau SAR, all valid Macau ID holders and Mlife members will be eligible to enjoy a MOP20 discount on each entry ticket and 20% discount on Oktoberfest merchandises. In addition, all Mlife members are entitled to receive two Oktoberfest entry tickets upon spending MOP500 at any F&B outlets of MGM MACAU or MGM COTAI. The number of tickets and tables are very limited, so get them soon before they are out!