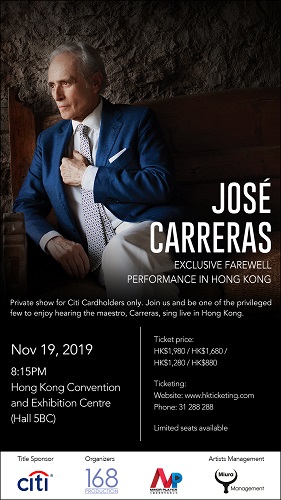 Almost 50 years into professional operatic singing, José Carreras, one of the legendary ‘The Three Tenors’, is concluding his scintillating career with a Global Farewell tour. Citi Credit Cardholders will enjoy the exclusive privilege to be part of this history-making moment as the opera supremo sings live in the one-off Hong Kong Performance at Hong Kong Convention and Exhibition Centre (Hall 5BC) on November 19, 2019. Tickets at HK$880-1,980 will be available on www.hkticketing.com starting from August 23, 2019.

The Performance is set to be extra special and emotional as it will see José Carreras say goodbye to Hong Kong, meaning this is one of the very last chances to indulge, with fellow fans and enthusiasts, into the divine and high-octane live vocal of the great tenor. He will be accompanied by an orchestra of 50 musicians on the stage to present a truly international operatic gala, where the maestro will be joined by the brilliant young local soprano Alison Lau. In addition, Chiu Tsang Hei, the cream of homegrown musician, is the orchestra music consultant for this show.

Ticket booking is open for all Citi Credit Cardholders from August 23 (Friday) onward.

José Carreras, one of the legendary ‘The Three Tenors’, was born in Barcelona in 1946. He began singing onstage at the age of 11, but his role as Gennaro in Donizetti’s Lucrezia Borgia in 1970, opposite ‘La Superba’ Montserrat Caballé, is generally considered his real debut as a tenor. Carreras is widely represented in operatic and concert recordings, with more than 50 complete opera recordings to his name. From 1990 to 2003, he toured the world alongside Placido Domingo and Luciano Pavarotti as part of ‘The Three Tenors’. He won the ‘Best Classical Vocal Performance’ award in Grammy Awards 1990.