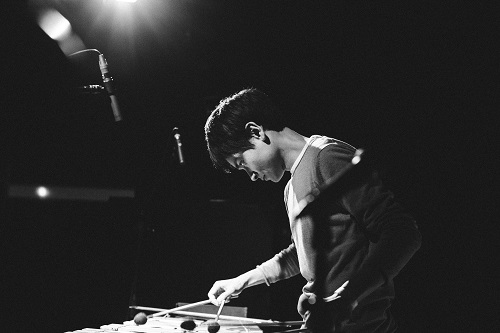 Following the success of the launch event of Niccolo Nights in September, Popinjays at the Murray, Hong Kong presents the second event on Wednesday, 16 October, introducing Berlin-based Japanese vibraphonist and composer, Masayoshi Fujita.

Guests can expect to share an atmospheric night of music at Popinjays as Masayoshi takes centre stage for his debut performance in Hong Kong. An interesting contrast to the hustle and bustle of city life below Popinjays, the sensational auditory experience will guide the audience to Masayoshi’s world of vibraphone music inspired by the silence and deepness of the fog, the mountains and the gravity that holds everything together. Through his music, the audience will take on imaginary world atmospheres, sceneries and stories, images that he has nurtured in his rich imagination.

Masayoshi began with playing drums, followed by extensive vibraphone training to craft and play his own compositions. Determined not to stick to traditional vibraphone styles or techniques and theory of composition, he seeks eroding the instrument’s intrinsic character or even abandoning it altogether. Apologues, his 2015 debut album with Erased Tapes, was a masterpiece and milestone for Fujita as he marked his presence with his multi-instrumental talent – such as the violin, cello, flute, clarinet, French horn, accordion, piano and snare drum played by friends, but arranged by Masayoshi himself. His recent collaboration with German electronic musician Jan Jelinek received a lot of attention from experimental music fans around the world.

Warming up the room and closing the evening will be DJ sets from Lai Fai of the legendary Heavy Crew, Hong Kong's pioneer on the reggae/dancehall and dub scene.

In the pipeline is the third event on Wednesday, 13 November 2019, as guest performer Tara Nome Doyle is scheduled to release her debut album, Alchemy, in the same month. As a Norwegian-Irish singer-songwriter born and raised in Berlin, her music is inspired by her childhood between city life and untouched nature, embodying inner conflicts and varying between slow, sweet melodies and ecstatic crescendos. Tara’s first EP, Dandelion, was released in November 2018 and has so far amassed over one million streams.