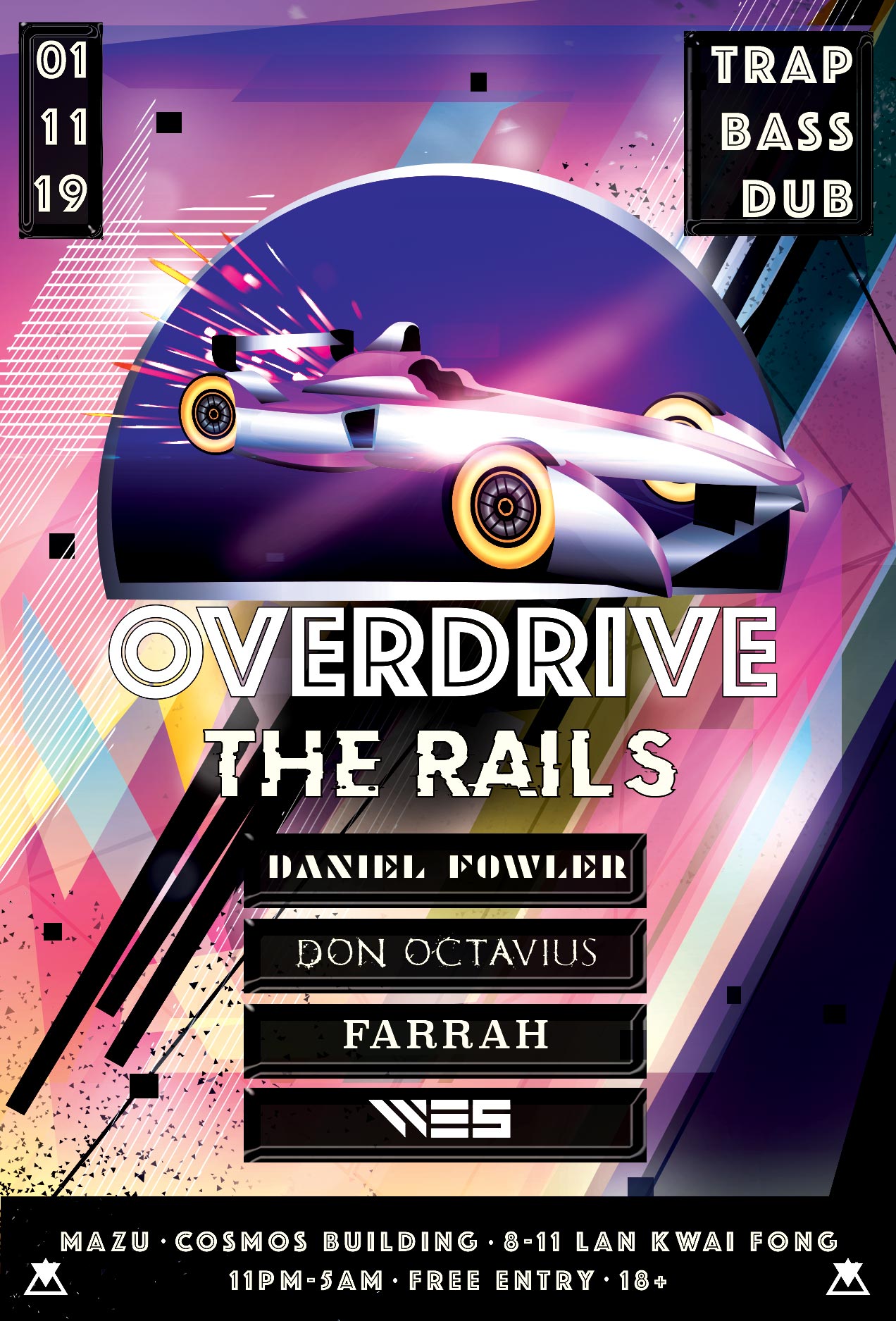 On November 1st, be prepared to step into a world of thunderous bass and wubs courtesy of Overdrive!

Overdrive is a new series that is bringing trap and bass music to the HK nightlife masses. We have partnered up with Mazu to provide you with great drinks and an open dancefloor for you to shuffle and headbang to! Best of it all, its FREE ENTRY!

Whether it’s wrecking dance-floors with thunderous trap and future bass, lifting spirits up with euphoric trance, turning it up to 11 with bass shattering electro or shuffling the night away with some groovy house, Don Octavius refuses to be defined by one genre. Forever on the hunt for new and interesting tunes, this Hong Kong born DJ has been a musician since the age of 4, playing percussion in his school concert and jazz bands. After discovering electronic music in high school, he learned to mix and eventually found a niche performing a wide array of genres. He has performed in bars and clubs in Hong Kong & Boston, always throwing down hard hitting and energetic sets for the crowds. He has shared the stage with the likes of Yellowclaw, Slushii, Jewelz & Sparks and Chace. For Caius Chung, there is never a shortage of great tracks to throw down on the decks and no greater joy than watching the dance-floor light up.

Farrah Ng, who performs as Farrah, is a Hong Kong born Electronic, Trap producer and DJ. She started producing 3 years ago and her openly published tracks has attracted the attention of the EDM and Trap community both locally and internationally online. Her Find You remix for Skrux & Felxprod has gained 75k plays. Her originals, Last Weekend; an R&B collaboration with New Zealand vocalist/producer VIËW has gained 9k plays, and Maybe I Do, a smooth chill trap song that has gained 7k plays across SoundCloud.

WE5 fell in love with House music in 2006. He started to take the professional path in 2011 when his friends bought him his first DJ gear. He was a resident DJ for Urban Agent Sydney and he started to play the biggest clubs like Volar, Bamboo and OPM Marquee Sydney in 2012. Djing professionally also led him to produce his own original records. His first single ‘Motions’ was released under Spanish Record Label Ritmo Loco Records on Beatport and iTunes in Dec 2012. His production is inspired by Avicii, Porter Robinson and Flume. In 2013, he started Djing in Hong Kong. He had his first DJ show ‘Motions’ at Kee Club Hong Kong and since then he has been doing gigs for Nova and Kee Club for numerous occasions. He has devoted most of his spare time doing remixes for Avicii, Calvin Harris, Zedd, and many more. WE5’s Gold Skies remix by Martin Garrix, Sander Van Doorn and DVBBS was supported by Top 100 DJ Sidney Samson on Rock the Houze Radio and his remix of Porter Robinson’s Sea of Voices has also gained the likes from Paris Blohm and many more international DJs. In 2016, WE5 participated in the Cymatics Remix Contest and has selected to be the contest winner with over 1,000 partcipants. WE5’s new signature future bass sound has also got the likes, support and follow from The Chainsmokers with 1.9 million plays across Soundcloud! His recent remix with Mickey Valen and Noé has already reached #8 in the Soundcloud New & Hot Charts in a week and the support from YouTube channel “Trap Nation”’s 2017 New Year Mix (Over 12M plays on YouTube). In 2017, WE5 has played in Dragonland Music Festival along with other big names like Steve Aoki, Zedd, Iggy Azalea and Black Eyed Peas. He is also the opening DJ for Britney Spear’s Hong Kong Tour at Asia World Expo.

Co-founder of Electric Mirage, UK born, Euroasian DJ/producer Daniel Fowler. Strongly influenced by classic pop/rock songs from the '60s – '80s, heavy/power metal, rap, and video games from the early '90s. Daniel throws genres out the window to melt hefty bass lines with cloying chords and beautifully magnetic melodies. His DJ sets are sure to delight and intrigue the ears of any music lover.