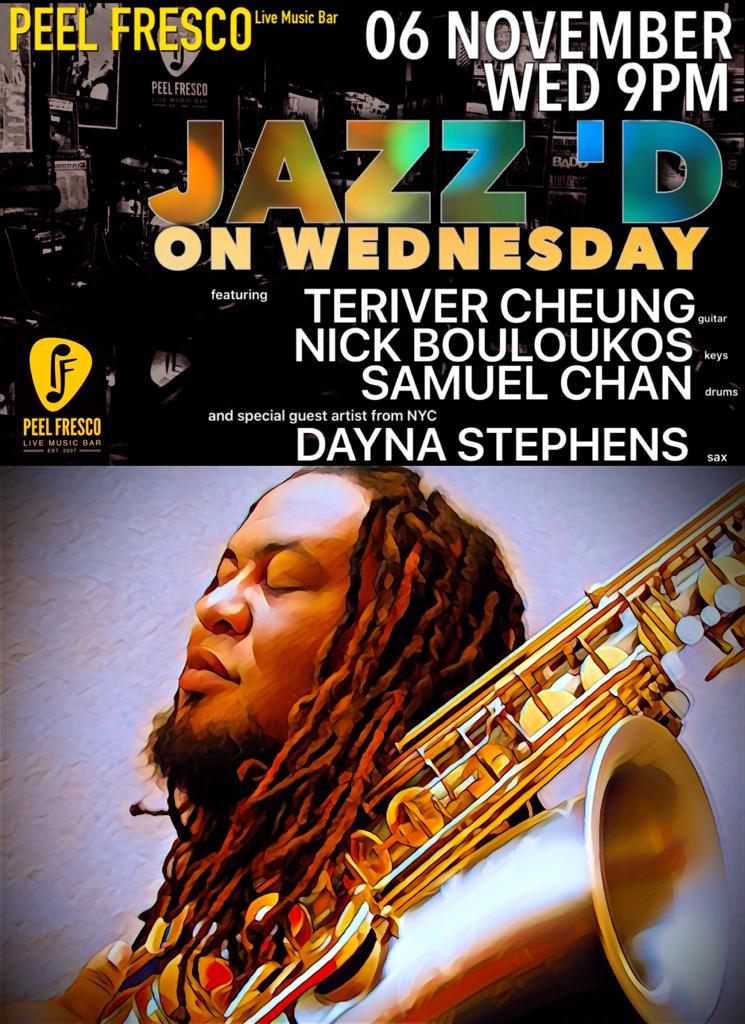 Coming from NY, Peel Fresco is delighted to welcome

A fluid, vigorous soloist with a warm and soulful sound, internationally-renowned saxophonist, composer, and educator Dayna Stephens has proven himself to be a master of composition and arranging, an acclaimed band leader, and an in-demand sideman for some of jazz’s contemporary masters such as Kenny Barron, Idris Mohammed, and Taylor Eigsti.

Born in Brooklyn, NY and raised in the San Francisco Bay Area, Dayna showed immense talent at an early age, winning many awards and music scholarship offers before accepting a full scholarship to Berklee College of Music in Boston. Following his graduation, Dayna was selected by judges Herbie Hancock, Wayne Shorter, and Terence Blanchard for the prestigious Thelonious Monk Institute of Jazz at USC where he studied and played with, among others, Shorter, Hancock, Dave Holland, John Scofield, and Mark Turner.

His 2007 debut album The Timeless Now features jazz legends John Scofield, Taylor Eigsti, Ben Street, Eric Harland, and Nick Vayenas. The record received a four-star review in DownBeat, reached #11 on the Billboard jazz charts, #9 on JazzWeek, and was featured as one of NPR’s top-10 Jazz Jewels of 2007.

Dayna has also established himself as a powerful educator, returning as a faculty member for the Stanford Jazz Workshop this year for the 11th consecutive time. He’s been a featured artist at the Sibelius Academy in Helsinki, Finland and has given master classes and clinics at various high schools and colleges across the US including LaGaurdia High School, Alameda High School, Cole Middle School, Washington Prep High School, Los Angeles County High School for the Arts, Islip High School, The JazzSchool in Berkeley, California, University of Southern California, and San Francisco State University