A Night of Laughs Comedy Night 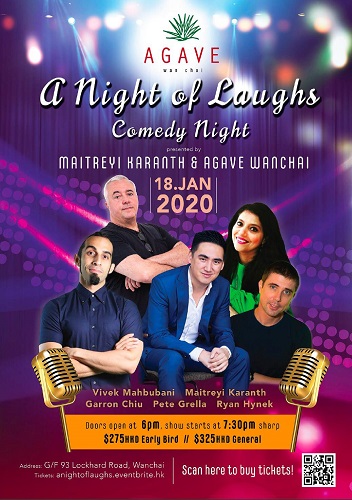 Having been ranked as the top comedian in Hong Kong, in 2014, the World Famous Laugh Factory in USA ranked Vivek as one of the top 10 comedians in their Annual Funniest Person in the World Competition.

Ryan Hynek - Ryan Hynek is delighted to be the emcee, host, comedian, or whatever you are expecting to see when you look at this bio. He says he was born in Chicago, USA because it’s the closest place anyone outside of his small town can recognize. You will usually see him bobbing around the Asian comedy scene opening for comedians with much better PR. However, he is a multi-time finalist in the Hong Kong Comedy Competition, has hosted the HK Ted X talks, emceed a myriad a galas where he needed to rent a tux, and has opened for other comedians whose names you would definitely recognize.

Pete Grella - Pete has also been performing and teaching improv comedy (short form, free form and long form) for over 10 years in Hong Kong and around Asia, including Bangkok, Shanghai, Beijing, Manila, Singapore, Tokyo, Osaka, Guangzhou, Macau and Seoul. He is a co-founder of the long form improv groups Pajama Party!, 852 Crew, and 3 Dudes Improv, and the founder of the group Hong Kong Improv. He has also co-run the HK International Improv Festival and currently the HK Improv Jamboree.