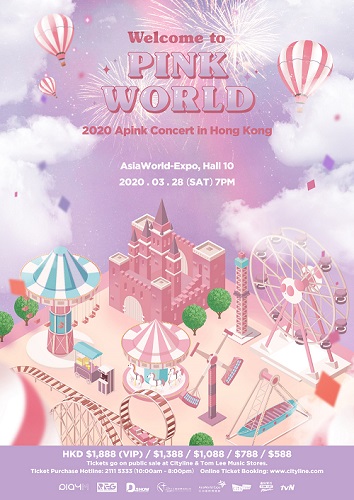 Apink is coming back to Hong Kong to meet the Hong Kong PANDA again!

Apink consisted of six members and they are Chorong, Bomi, Eunji, Naeun, Namjoo and Hayoung. They made their official debut on 19 April 2011 with their first mini album Seven Springs of Apink, which 'I don't know' is the title song. Apink has been maintaining their concept of freshness, purity and sweetness since their debut and they were even granted the icon of 'Innocent Girl idol group'. Their singles named 'NoNoNo', 'Mr. Chu', 'LUV' and 'FIVE' that were released in their previous years, and '%%(Eung Eung)' that was released last year, topped various Korean Music Chart rankings, and had appeared many times to be No.1 on Korea Music Broadcast.