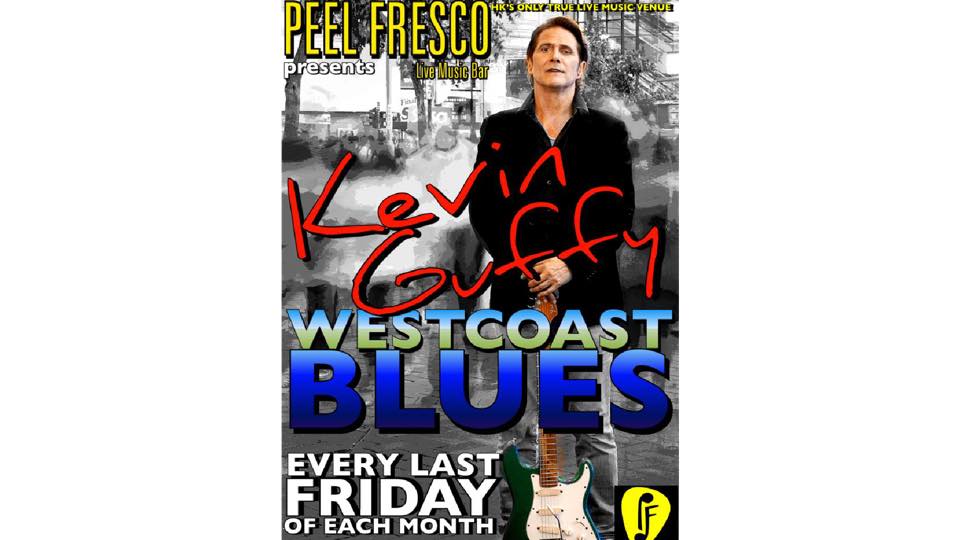 Westcoast Blues this Friday, 9:30 in Peel Fresco, with

Guitarist, Vocalist, Songwriter, Kevin had a guitar in his hands as a kid and began performing professionally when he was teenager. Kevin joined his first blues band with bassist John Mazzocco. Self taught, he began gigging in Portland Oregon with acclaimed bassist Ben Wolfe. At 21 he hit the road with the band The Inkspots. Kevin played with great players as a youngster in Portland  “I was Lucky to have such great players to hang with”.
In 2006 he moved to Hong Kong where he performed live with the JJ’s house band at the Grand Hyatt Hotel. A versatile player, Kevin went on to spend ten years in jazz circles performing with legendary Jazz fusion pioneer, Jim Pepper,  bassist Lester McFarland and bassist Ben Wolfe. Kevin was deeply influenced at that time by legendary Jazz fusion pioneer Tenor Player Jim Pepper who was living in Portland at the time, he did some gigs with Pepper  and learned from Jim “his presence influenced me just being around him”. Kevin began working as a guitarist for the Inkspots, country legend Furlin Husky, the Coasters and other sideman work. Later he began song-writing and formed his own band releasing his first Album in 1997 where he worked throughout the states. He subsequently went to Istanbul, opening Harrys Jazz Bar which became the most popular club in town and went on to play dates in Europe and the Mediterranean region. Making home in Hong Kong now, where he writes, teaches and performs regularly.