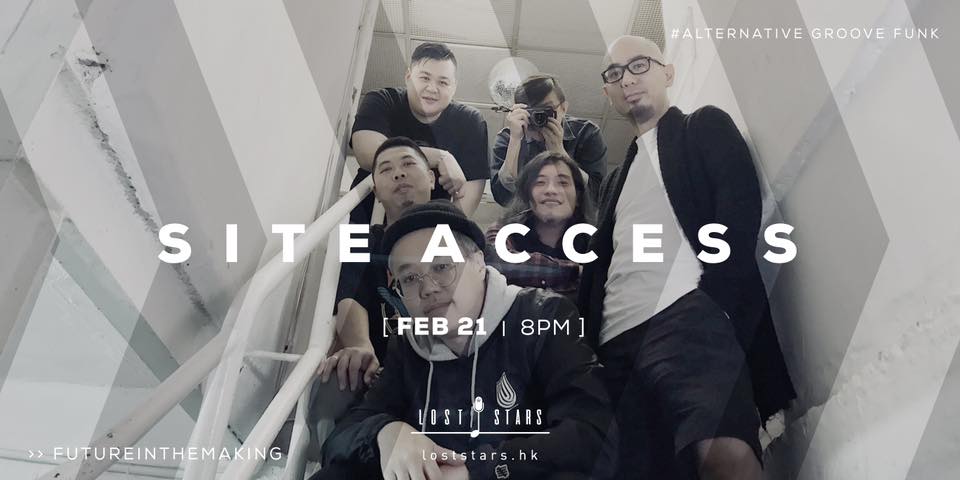 The music show will be separated into 3 sessions. In order to create a pleasant environment for music enjoyment, servers will not take orders during the performance. After 1 session of show ends, there will be a 20 minutes intermission. Servers will accept orders again. Clients could go outside freely during the performance. But when clients come back to the house, please follow our staff arrangement patiently. Thank you for your understanding.

1. No time limit for customers after entry

2. Minimum charge : One drink plus one food / two drinks

3. Please lower your voices when talking so as to avoid affecting other customers’ music enjoyment

Site Access is a Hong Kong based band formed in 1997. Their songs cross many genres,

including rock, punk, alternative, emo, ballads and more. The band is influenced by various

The band was founded by Yim and Mao in 1997. They then put an advertisement in a local

youngster magazine for recruiting a drummer. Soon, Shing was in the fold. The name of the

band came from a road sign outside a construction site. The trio were playing instrumentals

One day, their friends from another local band “The Pullover” introduced Brandon Ho to the

band in 1998. Since then, the band's 4-members lineup had become stable and they started

writing their own songs in their bandroom located in a factory building in To Kwa Wan.

Their debut album "Slow Jam" with 8 original songs recorded DIY with Cakewalk and self-assembled Pentium 4 computer in their bandroom was released in 2000. After a couple of

years, Mao, the original bassist decided to leave the band. He was then replaced by CM

Groovy. Together they started adding more funk to the music. Their performances were

always slightly different because they liked to improvise on stage. Then, in 2003, they

released a mammoth indie album "Funk Fu." This was like their icing of the cake. Alternative

Groove Funk at it's best. After two solid indie albums, the band decided to take a break in

In 2010, Brandon (Vocal), Shing (Drums) and Yim (Bass) joined hands together and started

writing new materials as a trio. What brought them together was a love for music and the

enjoyment of being in a band. In 2011, they performed in the very first Clockenflap event

held in the West Kowloon Cultural District. Since 2014, Wai (Guitar), Chi (Saxophone) and

new songs for their third new album. The new brass instruments broadened the scope and

thickened the context of the band's music.

Now, the band is ready to bring more variety to the local indie band scene.